Show us your Cadet

So as the title states show us your cadet.

So after the normal wait for approvals that is the norm in WA, I got to pick this one up today.

Put in service in 1909 and issued to Queensland. It is in very good condition and has the first series sights on it.
None of the screws have been butchered and the trigger housing pin has not had anyone confuse it for a screw.
The stock has the normal dings from being used but no large chunks have been taken out.
There is no pitting to the barrel and the rifling is great.

The big question is do I leave it completely as is or do I gently clean it up, metal work and clean off all of the old oil and grime from 111 years and re-oil it? What are your thoughts??? So now lets see yours.

I still haven’t picked one up, on the to buy list once service returns to normal. Probably in 222R.

I think I already have the coolest martini there is with the Greener Police Gun.
it’s funny you say that about the .310 and the .32-20 as even though I have no interest in the .310 I have always wanted a 32-20. They chambered an old savage bolt action in it that I’d like.

A cadet in .357mag or better yet max would be cool too.

A post was merged into an existing topic: The big fat COVID-19 thread. 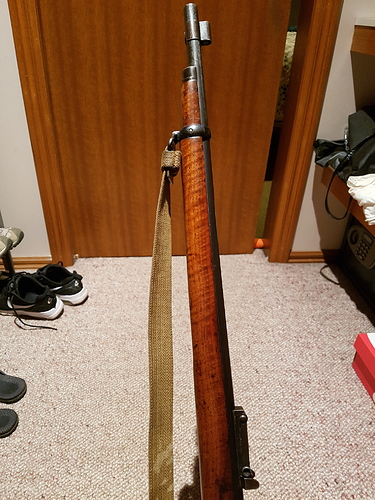 It only took 4 months and THREE - yes, THREE PTAs (long story), but lockdown has ended and I finally managed to pick this ol’girl up. Pretty happy, I think it’s in a very good condition for a 100yo gun, excellent even. The bore was absolutely filthy, took a few wet patches to start coming out clean, but after that - absolutely freaking pristine.

Tried making a dummy round for it, to start reloading, but Lee obscure calibre dies fucked me again, severely under spec. Pathetic. Tried to tweak it, but just gave up on them and Lee in general (at least for obscure stuff) and went with Simplex. Hopefully I’ll get to shoot it soon

funky little thing, will live in a safe next to its older bigger brother

Nice one buddy, they are lots of fun

Here’s mine, not in great condition, rescued from a farmers shed… it never ceases to amaze me how farmers are happy to let something rust into the ground, but you just about have to prise it out of their dead hands in order to put it in a loving home… That’s a funky display you have there, is it part of a bigger collection/theme?

Thanks, just bits and pieces I’ve collected over the years. Service records for my great- and grandparents and some of their medals, a photo I think is of my Mum’s dads graduation from basic training, a few battlefield photos he took during his service in PNG during WW2, a rising sun and brass buttons, A couple of “A” for ANZAC buttons, a photo that is claimed to be of my great great grandfather and his artillery unit in the Boer war…

I’ve got a few post war social club badges and workers tram tickets too. Nothing major, just a few memories.

I did, I bought his cadet, and dies, but the ammo was out of my league

I often wondered about the cattle killer cases as I have seen them on Australian Once Fired Brass.

310 Cattle Killer - Fits Cadet and others

I’ll take a photo tonight of side by side, they are a bit smaller.