I was a big fan of the Oz made Power Points so when they shifted production back to the Ewe-Essay I had been meaning to try them out.

Bought a packet yesty and decided to do some tests, the results were far from encouraging, below is the 25 Oz made I had left weight batched. Below is 25 at random from the Yankee product Next I made some noise and things became less encouraging 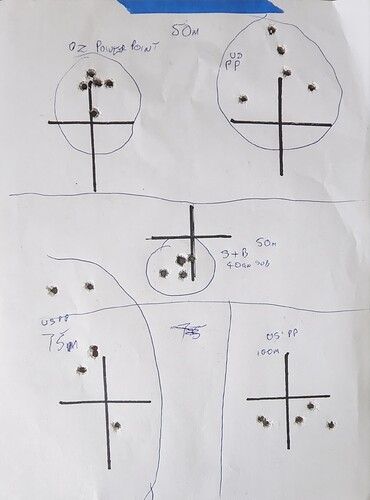 I then compared the 2 up close, Oz on the left, US on the right I don’t know what that crusty snot that’s all over the Yankees is but it’s very inconsistent with some hollows full of it, some half full and some with very little.

I won’t be using these on critters.

“Karen” will be writing an expression of dissatisfaction to Winchester today.

Exactly the same outcome with their subsonics . Not worth a pinch of shit since they sent production over there

I bought a bulk pack of the 100 year anniversary power points. They kind of shot very similar to the 555 bulk stuff. Despite the the 555 stuff being 32 gr? And the power points being 40gr. Was this the stuff in the clear plastic pack?

I agree the Australian made power points were better.

That’s the one, clear red plastic.

You could try putting hundreds of those USA PP’s through your barrel until that wax settles in. I know it sounds lame, and yes it is a long shot, but 22s can be a real pain in the arse to settle as the rimfire barrel just doesnt reach the temps of a centrefire. I learned this from another shooter on a forum who puts hundreds, bordering on a thousand rounds of a particular 22 through a barrel before he decides whether that brand variant is suitable for the rifle or not.

Always found them ‘agricultural’ and filthy at best

I loved the ol T22 subs, my Anschutz would shoot a little over an inch at 100yds with them. Dont know if you can even still buy them…at any rate, i found the wax coated lead bullet, more consistent than any copper coated stuff. Never having to clean the barrel, was a bonus also.

I want to test the difference between the Oz and US in that too.
If I can hit the block with the dodgy US shyte.

PS
“Karen” has written a polite What The Fuck to Winchester Au. and awaits a response.

Unfortunately, Winchester’s response was as I anticipated.

Wow, too bad we’ll pass it on.

The old Power-points from the 80’s and 90’s in the red/orange boxes, were always good rabbit ammo, shot pretty well out of any rifle and were relatively cheap. The black boxed stuff got expensive and I haven’t bought any since about then.
The right batch of T-22 ( Yellow box ) in the early 2000’s would shoot as good as Tenex out of my P94S Sako for silly-wet.

It’s the same with virtually every industry we’ve thrown away here DM.
They bin a high quality local product to make an incremental increase in per unit profit by getting the lowest bidder in some Third World sweatshop to make it and the consumer gets it in blurter, every time.

This morning in the spirit of experimental proprietary, and my own OCD, I had to give them the best chance.
I picked out 5 of the same weight, with as close as possible(they vary widely) to the same size and shape HP, cleaned the snot off them with some turps, rag and a toothpick and with the uncleaned previously fired acting as my control batch, fired 5 of them at 50m.

Obviously not the snot then, just shitty overall.

They should whack trade tariffs on businesses that have sent their manufacturing off-shore, sacking Aussie workers, then importing their crappy made shit back at huge profits. ( not really talking ammo here)

If its accuracy your chasing…Eley is the answer…

I tried some Eley when I first bought the rifle and found them very good, unfortunately the local says he can’t get them.

Center X make me giggle like a girlyman every time I use them they suit my rifle so well.

Im not familiar with Center x…but Eley have a great subsonic range, which will outshoot supersonic 22 ammo everyday…

It’s a lower tier match round from Lapua.

I weighed randoms in the brick and they were all the same so I weighed all 500 and every one was 51.9gn

I found that SK shot a lot better than Elley with my guns. Centre-X though, ooof, that’s centrefire prices right there, definitely not for the type of shooting I do.

Yeah well, not everyone shoots a brick off between mouthfuls of coffee like you…

Sorry, I forgot you were a connoisseur, I just drink a lot of it.