We all know about the saying “Its going straight to the pool room” well what about sharing some achievements or Toys you have or anyone in the family has. Put it here as some of the items may give away your identity and more.

Also amongst friends it not an open brag its just a sharing of those “minties moments”. Like running down to the pub to tell your mates about the hot chick you scored. I’m sure we are not to old to remember those days.

Yes I do have one to share just need to take some pics.

…of the hot chick you scored with? Lots of nice stuff. I envy that big fish experience. It must have been really something. The amount of time I have spent fishing never to come up with much more than 6 inches long. Even the time I did go out fishing in Darwin I caught a shark it was probably just over 12 inches. (Time spent fishing in no way amounts to mad fisher man. holiday fishing only

I fish like you too @sungazer, Even living in Townsville for 5 years and having mates with boats I hardly ever caught more than bait, although I usually did well on the mud crabs, oh and tilapia, I could always take the kids down to the creek near home and catch bucket loads of them.
once we moved to Victoria everyone pretty much lost interest in fishing.

Back to the actual thread though, My Slouch Hat would be my main straight to the pool room item, along with my farewell 105mm cart case!

Got a signed ( to me ) poster by peter brock, bit of a treasure

I must admit, I’m not really sentimental. I used to be, until I moved out of home… A while ago… LOL I looked at a box of stuff and went, why do I even have this, chucked it in the bin and that was that. Never really looked back. I have a wire basket of horns and antlers that are sort of just there hidden away in the garage, I don’t even display those. Guess I’m just not a display kind of guy. I much rather have a cool experience than an output from it.

I do have a jar of cases, I’ll post a better image of that, that’s really the only thing I am semi sentimental about, but that’s more of a collection/hobby than a proud moment momento.

Mate save some of the stuff. When you get older you wish you would have kept all kind of things.

This is my achievement for the year and I am still smiling 4 months later. It may be an achievement that may have to last me a long time as my moment in the sun.

I entered the Victoria Queens prize shoot back in April this year and won. An outcome I never dreamed of in my wildest (shooting) dreams.

There were competitors from all around Australia entered and some of the shooters had 50 years experience. I was only competing in B grade which is determined by a percentage system based on past performances. This meant that there were guys that were normally A grade but turned in one bad performance and their % dropped below the threshold. I was surprised that there were people that had so much experience that would shoot in the lower level.

I was up against guys that had shot the event many times before even in A grade One from NSW that had shot in Vic for the 12 years prior in A grade, as well as many other States. Another guy from Tasmania that had just competed in A grade in the Tasmanian Queens a couple of months before. So after seeing the competition I was really hoping just not to be disgraced.

The Queens Series is two competitions a lead up event over two days (6 ranges) called the David Syme and then the Queens shoot over 3 days (8 ranges).

Anyway I got off to a good start in the lead up event and although I choked on the last shot of a few ranges I still managed quite a few good placings and won that event overall.
When the Queens started the field grew in numbers. I was still up there holding my own often missing out on a placing by just a point or a center but well down on the leader board. The conditions over the three days as you would expect at that time of the year where changeable but I managed a good consistency. Gradually climbing the leader board due to my consistency. Others were up and down range to range.

Going into the last range to be shot at 1000 yrds I had moved up to 3rd place. I was shooting from the worst place on the range that the shooters call Siberia as it is up against the trees and the conditions are hard to pick. I wound my scope back in magnification so I could watch the mirage moving across the ground well in front of the targets. I picked a speed of the mirage moving across the target and shot. When I got that condition I shot as fast as I could trying not to get caught out in a wind change. Twice I got caught out not picking the same condition which resulted in 5s. This last range as it often does caused the leaders a lot more problems than me and I moved into first place overall clear by 2 points and 4 centers.

I ended up with 10 range prizes over the 5 days and managed to lose a first place medal in all the comings and goings. Along with the range prizes I took home some good prizes as well. A great rifle cradle to hold the rifle while cleaning, a nice backpack, an Anzac mug, a goblet quite a bit of cash and the most treasured of all is the very Traditional Patch.

That’s a pretty monumental achievement. Especially, to win in something that you just enjoy doing/hobby and not a full time job. My warped mind works a little different. I would be completely over the moon about something like that, but I wouldn’t really do anything with the medals. I have a few from other sports, they are just packed away somewhere lol Just happy it’s in my head and I know that I did it.

I am the same, I have medals and trophy’s from days gone by that are just relegated to a draw or a box in the garage. This time i thought I need to keep these all together and so they can be displayed easily. The Queens shoot really is an event.

This is a short video of the closing including Piper escort. Some of the Trophies are about 150 years old. 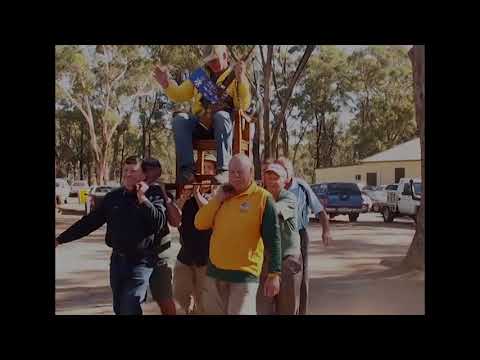 The bigger event the Queens Prize held at Bisley in England has just been run. Bisley is an amazing place and teams from around the world, universities, the different Army / services cores all have club houses on the grounds. Have a look at the NRA of the UK FB page for some of the photos and the videos esp the last video. Not as impressive as Sungazer’s Queens win and no-one carried me on a chair but i won our ‘Dead Eye’ comp by placing the majority of my first shot of each range day into the 5 and 6 rings.

If I had a pool room, this would go straight to it for the next year!

Nice one mate.
Do you get to shoot your own trophy?

Haha… nope. It’s a perpetual trophy and the Secretary made it, so he had fun shooting ali disks with his 308. I just get to house it for the year and have my name added. Hopefully I’ll keep it for a few years.

I do have to make myself another knife, though, as that is also part of the prize. I have a blade mostly finished but as i knew it was for me i didn’t rush to fit a handle, etc…

Its a really good idea to promote those first couple of shots as being centres. For one it really makes you pay attention to your elevation settings and also for judging the wind as correctly as you can. Then it comes down to a centre in the hand is worth well a centre.

Good luck for next year.

Cheers mate. That’s the idea. Get people to concentrate on learning their ballistics and reading conditions for first shot scores. Too many people have no idea what they are shooting and waste their sighters, usually dropping too many points in the first few scoring shots. Is that a brown trout?
Nice looking fish either way mate

Measured it against the handle of my fishing rod. 54cm! Best fish for me to date out of my little stretch of creek. A hen fish in pretty healthy nik, estimate just shy of 3lb.
No wonder she took a bit of convincing to calm down enough to come in!

Not bad when you can snag that in a half hour without even leaving home! Good one mate, that sure is a beaut spot you have there!