Coppers are hiding this behind “stopping bikies” but reading through they are just putting through all their stupid polices and making them law.

We’re putting something together on this now - there’s a lot of very concerning stuff in there.

14 years for fixing your own gun nice,

23AD. Unauthorised repair of firearms and other things
10 A person who repairs a firearm, major firearm part or
11 prohibited firearm accessory commits a crime unless
12 the person is authorised by a licence under this Act to
13 do so.
14 Penalty: imprisonment for 14 years.

What are you in here for?

“Cops found a helicoil with a non standard 8-40 screw. I couldn’t provide a reciept from the gunsmith.”

Do you do stage nights? This genuinely brightened my day.

No, but imagine also the headlines:

"With their faces covered and armed with assault rifles, officers from Strike Force Raptor swooped on a suspected home gunsmith at 4.00am in the usually quiet leafy suburb of Dalkeith. The team uncovering a cache of 23 allen keys, 17 hollow ground screw drivers, up to 200 metric and imperial fasteners including highly regulated socket cap and Torx, some already coated in factory loctite meaning they can be used to assemble a firearm in working order in just seconds and not overnight. Disturbingly, police also uncovered books written by notorious jailed extremist Nick Harvey.

“These books have been turning up at every single raid we’ve conducted. We don’t know how Nick Harvey is communicating with these cells from incarceration, its some kind of code they have that we are yet to crack, but I note also that similar material from overseas by organised cartels like Hornady, Nosler and even local syndicate ADI are being uncovered and siezed.”

“In my 28 years of working as a police auxillary in the firearms registry, I have never been outside, and to have to actually go outside and to have been a witness to such a trafficable amount of gunsmithing tools like what our officers have uncovered rocks me to my core. No one needs a lathe. No one needs a milling machine, and todays discovery of a 48” bed, that’s right, fourty eight inch bed, CNC mill with interchangeable four jaw/three jaw six axis auto change tool head, customisable x/y D.R.O, swarf management, lubrication function and a 10 year warranty, well…it’s just left us gutted really"
Detective Michael Hunt reiterated that this bust will push the price of cerakoting to over $1000 for Flat Dark Earth and even higher for Olive Drab.

“We are putting you on notice. We will come for your calipers. We will take your micrometers. We will jail you”

Neighbours of the alleged terrorist woken suddenly from their sleep as stun grenades exploded nearby were shocked to find out about the activity of their neighbours. “He seemed like the perfect neighbour. Never any loud music, lawn tidy, house clean. We used to here a clicking noise that would go on for an hour or two on the weekends and thought nothing of it, you know the usual ecstacy pill press pumping out a batch of purple black jacks, mitsubishis and defcons for a weekend of wholesome raving. We had no idea he was making live assault weapon ammunition. In our own neighbourhood . We are considering moving to Moelbourne.”

You really should be an author, or at least an Onion News Reporter!
Have you considered learning to code?

Have you considered learning to code?

below the belt. My favorite place.

If anyone has time to read Hansard and find out how far removed from reality our elected official’s are have a go at this. It starts on page 24 regarding this bill.

It contains references to, trump, palmer, right wing extremists, mt kosiosko brumbies, new york times, everytown for gun safety and some personal accounts from a police office that has personally confiscated 1000’s of firearms in WA.

Sheesh, with numpties like that (on both sides) you guys are up against it, for sure

Yup, the western border between VIC and SA is starting to look appealing right now. 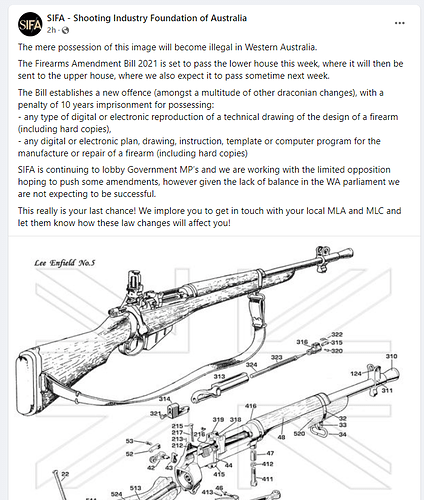 Sooooo, just so I am clear, it is now illegal to buy guns in WA, because guns come with manuals that contain this exact exploded-view of schematics?

And that last bullet point… does it mean CAD and 3D slicer applications are now illegal? And is that in general for all engineering shops or just for licensed individuals?

Uhhhh hold on, hold on, hold on… Looking at this picture on your (digital) device, which will, (1) download a copy of this page, (2) save it, and (3) then render it on your device… effectively forcing you to own a digital copy of this image make you a criminal? I mean this is generally how the Internet works. And if so, does it mean that: if a person (licensed or not), for example, browses Amazon and notices an inside-peek/preview of Skinnerton’s books (or anything similar) - they will become a criminal because a cached (saved) copy of that page is now stored on their device?

When asked about getting better clarification in the act the cops just said it is for bikies so no need to change, and you don’t have to worry about the changes unless you are a member of a gang. Because yeah, cops haven’t used the vagueness of legislation to prosecute people just cos before.

Well, I am just reading it as it’s written and making my own conclusions here.

As are all of us in the firing line from them.

So Greg how are the moving plans coming along?

If it was just me we would probably be having beers already @bentaz . Convincing the missus is going to take time but our premier is slowly doing it for me though.