I’m pretty happy with olight at the moment. I haven’t put it to too much use yet, but it doubles as a simple torch. I wouldn’t mind seeing a quick release mount rather than the screw tight mount you can get for it, but that could just be me being picky.

Ozzie reviews did a video on it as well: 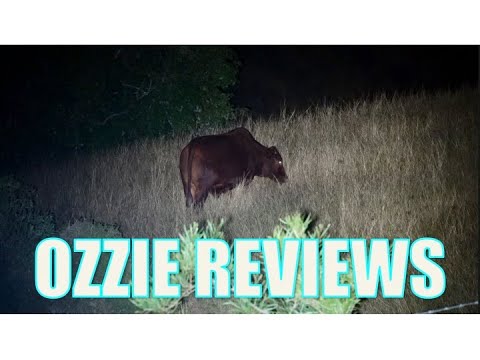 Thanks Ats3 i’ll check it out mate

I have a Maxtoch Shooter 2X with Red LED. Its absolutley outstanding. After setting up mounts on 2 differnt rifles and lots of farting around i opted for the Olight Magnetic Barrel mount so you can just flip it off one and onto another in a matter of moments… It’s never even looked like dropping off from recoil even on my S/S barrelled Howa 1500. 223 although its generally coupled to my 17HMR which has the Cerakote finish.
i opted for the red pill rather than a filter and consider the beam quality much better. 2 guys ive spotlighted with have the Olight Javalot units, i think the Maxtoch is head and shoulders above for beam quality and penetration. The plastic barrel clamp which came with it is a compromise as i couldnt align the centre of the beam with my reticle cross hair… Im too fussy about the small things

Another vote for the Olight, although i’d also have a look at getting their magnetic barrel mount too. It’s awesome, you can spotlight with it then in a split second throw it on the barrel and shoot. After testing them both out when i got them i’ve never used the scope mount in the field, magnet all the way.

And another vote for the olight javelot. I’m very happy with mine, on turbo mode it easily outshines my lightforce spotlight. The guys from boltaction productions (youtube) reckon the maxtoch @Pogmahon mentions is even better than the olight…must be a beast of a thing.

Thanks for that JS

And another vote for the olight javelot. I’m very happy with mine, on turbo mode it easily outshines my lightforce spotlight. The guys from boltaction productions (youtube) reckon the maxtoch @Pogmahon mentions is even better than the olight…must be a beast of a thing.

There’s also the Acebeam w30, which is a different light technology to led and the brightest thing i’ve ever seen, but it’s a really fine pencil beam with no spill and i don’t think it’s as practical TBO. But if you spotlight with it you don’t even need to take a gun, the w30 will melt a hole in the animal and possibly even the hill behind it. It can spot further than i’m prepared to shoot. Plenty of youtube stuff on them. Yep, positive results with the O-light. Mine shines a lot further than the 200m zero my night rifle is sighted in for. Biggest problem here at the moment is the dust. Driving around spotlighting just means a big cloud of it when you pull up. Cleaning the rifle after a session starts with the air compressor and blow gun.

Yeah danmac I did find not dust but smoke from the fires here did affect the torch more than the spotlight i’m presuming that it is the intensity of the beam causing this early in the night it was reasonably clear and I reckon I could shoot to about 250yds clearly but that would be the most I would hazard a shot after that you would be relying on the eyes to locate the animal but on saying that the batteries may not have been fully charged as the shop owner had them in another torch behind the counter and they were the last 2 he had so may have been used and this would result in the torch being a little better than i’ve seen the kit come with charger, pressure switch and adapter tube for smaller batteries, 2 batteries, holster for belt, magnetic barrel mount , extension for the larger batteries and spare waterproofing o rings all for $329 I thought that was a fair deal most places don’t give batteries or the charger but I think it’s the normal thing to get what I got in the kit

Yeah mate, I got the full kit, actually bought it in Ballarat before attending “Plinkfest” 2018.
Over the years I’ve found any shot over 250m under a light is starting to stretch it no matter how good the light is. Shooting at “eye-shine” is fraught with dangers. I’ve had cattle shot by trespassing idiots doing just that.

So has anyone found vermin are more light shy of LED that the old style spotlights?

I have heard that, but my own experience doesn’t seem to support it. The good LED torch I bought outshines both of my lightforce spotlights (which were the busy knees 20 years ago) and as a result I think actually see more animals with the LED