I think I have found my calling. Whistling foxes. It never bores me and is always interesting and can be a challenge. Foxes can be funny buggers one day running next over sneaking around trying to get wind of you or you just don’t see them at all.

This must be the biggest/fattest Fox I’ve ever shot its as fat as a pig. Here’s the story.

The other night I spoke to a mate and he said he had 12 goat kids born in the recent weeks only 4 left. The rest seem to have fed the foxes he said. He hasn’t seen a fox more over a month so he guessed they have been coming in at night. Anyway as it happened I was driving past on Saturday late in the arvo after a disappointing day out hunting. I had the 223 in the ute, so gave him a bell and told him I would drop in if that was OK?

So after a bit of a yak with John and a cup of coffee at about 4.45 pm I went for a walked 80 meters down his driveway sat down on my stool in front of some Cypres with the 223 and some shooting sticks. The sticks are just made out of a TV aerial, the rifle a Marlin XS Bolt action, 3 - 9 x 40 scope…

I gave the button whistle blow but that didn’t work after about 10 minutes so I decided to try the tenterfield. It was windy and very cold so I no intention of staying for very long. The tenterfield seemed the best option, being so loud. In just a few minutes I spotted about 300 yards something running like buggery up the hill towards me. It looked like a dog, and I thought it could be the neighbors. So I better be careful, but as it got closer I realized it was a really big fox and he just kept on running and moved around to my right. He didn’t look like stopping I thought he’s going to run past me so I adjusted the shooting sticks and called “oi” and he stopped, next thing is bang flop. Interestingly he his lost his tail at some point.

What is the best whistle? Well Iv’e found the tenterfield to be fairly consistent but Iv’e called them in with button whistles, duck callers, toy queakers and DIY tenterfields. No wonder I’m fast getting addicted. 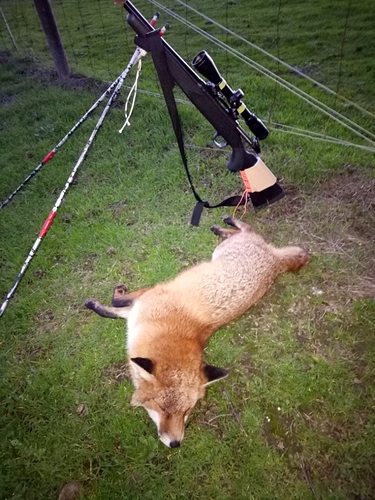 Very nice, @Oldbloke. Now I feel like I need to go some fox/bunny busting.

Nice one OB, cant help but wonder what happened to his tail.

Nice work OB:grinning:
Tell me ya kept the fur!!!

Jeez mate, are you sure thats not the neighbours dog? its huge!
Its been ages since I whistled up a fox, I might have to get out one arvo soon. I know there’s heaps around here, I saw 4 the other night on the road coming home from Geelong, I almost got one with the ute!

There must be truck loads around your way. Lots of farms and forest & not many people equals lots of foxes.

IMG_20180721_134637.jpg1730×2307 2.68 MB
Went away with JS over the weekend to try out a new goat hunting spot, lots of sign but didn’t get onto any. We did see a few foxes and there were fox tracks going all over the place, I took a snap shot at one and missed him from only about 30m, JS bowled one over from a good ways off that was sitting in the middle of a paddock just enjoying the mid-day sun. We whistled up another just before dark and JS should pipe in soon with a pic of that one soon.
juststarting July 23, 2018, 10:59am #9

Indeedly do, that was a quick snapshot, I didn’t see the fox, until I saw the rifle flew up. Pretty good effort.

Me, funny, I started my hunting backwards. I’ve shot deer, well, I’ve shot at lots of deer now, I happen to miss lots too

Then goats and now on to foxes. Sort of moving down, when most people move up. Anyway…

I was walking along, deep in thought about the damn goats and I say, to his excellency, the last white hunter, let’s whistle some foxes, being that I have no idea how and wanted to learn. And he says… Why don’t you just shoot that one over there. Bah! So there I am, a little bit more excited than usual… Boom! Mother$-$&#er does a jump, runs 2m and sits down. I think I missed, which is, to be perfectly honest, unusual for that situation. @GUN-DMC reckoned I got it, considering it just sat there, “thinking, why all of a sudden am I having c#$& of a day”.

I work the bolt and follow up. Definitely hit it, engine room. This prick is some terminator special operator fox, having none of that, does another jump and off it goes. WTF!!! What are you?! Runs to the nearest tree and drops dead. So I walk down to retrieve this invincible freak, while @GUN-DMC hangs back with the firepower. I come up… Aaaand off it goes again. FFS! This time I get a close look at what’s going on, as it literally tumbles to the next tree and drops dead, again. I’ll spare the gory details of what was displaced where and how big. And that was that.

Few hours later, I’m given a private lesson on fox whistling, 100m shot. There was some discussion whether it was a 100 or less, but judging from the POI it was a 100’ish. This time we approached this prick hot. Perfect head shot. Second foxy in few hours. Ain’t to bad. And a lesson in fox whistling, also awesome.

The other side looked a little less neat. I took my oldest grandson Evan out fox whistling last night. I did plan on going to a larger property but due to lambing the farmer preferred I didn’t shoot for the next few weeks. So we went to the property where I shot the fat fox a few weeks ago, some of you might remember. Anyway after a yack and a cuppa we got a bit of a spell between the rain for about 15 minutes and sat down in amoungst some cypress trees. After giving a few whistles we saw a flock of crows tack off about 300 yards away. Waited a minute or two and another blast on the tenterfield & guess what come trotting along? Evan was a good boy and sat quietly and didn’t move which I thought was good for a 12-year-old. Anyway after a couple of kisses he stopped at about 70 yards and I let him have it with the 223. Here’s a pic of a very happy Evan and the Fox. A hot chocolate for Evan and a stubbie with John, our host afterwards before heading home to a proud mum. Making memories.

Hey OB is there any chance that you could do a recording of you whistling for foxes and a bit of a write up of how long to whistle for. Short bursts every ? kind of thing. I have never been out with a fox whistler so I have just given it my best shot which I dont think is on the right track. I have managed to get a few to come or at least stop from running away. Would really like a tutorial.

Yep, definitely worth a write-up, after my preconceived ideas from YouTube were shattered by @GUN-DMC. I think that would be an awesome article.

See how I go for time. Ummm a recording might be easier?

I think, more the duration, how long, how long to wait for, wind, etc. Less the actual sound and more the methodology.

I am interested in the sound as well. The button whistles you can suck and blow through and make a very distressed sound. I have heard a rabbit squeal before. And JS get your mind out of the gutter it was not like in the movie Deliverance

So I have tried a few different whistles but by far the Tenterfield gets the best results I shot a few with the button whistle and even a duck caller sitting near a dam. Naturally morning and evening is best.

Try not to walk in the area where the fix might come in as he might pick up your scent. I always try to set up in such a way that I have some cover behind or around me. I always try to shoot into the wind, at least a cross wind. I look for locations that I think of Fox might be living in ie Valley or River/creek system perhaps even a rubbish tip. The buggers are everywhere. They seem to like blackberries creeks and Gullies and farm land. You get the idea.
So I’ve found a spot with good cover I’m wearing camo gear including a face mask and gloves. I often sit on a little stool with shooting sticks. Rifle loaded I’ll give the Tenterfield two or three or perhaps four blasts each lasting about 5 seconds with the short interval between each I try to end each call with a whimper. I usually then wait 2 or 3 minutes before I give it another blast I’ll continue to have a whistle every two or three minutes for about 10 or perhaps 15 minutes. Usually they come running within 5 or 6 minutes. So sometimes you will see birds or sheep being disturbed as he comes in. If I think a fox is on the way in I stop whistling. Remember every time you whistle you need to move your hand and gives see movement really well.
One thing I’ve noticed is they spot movement very quickly so I do my best not to move if they are looking in my direction. I then only whistle if he has lost interest. A kiss sound usually stops them for long enough to take a shot.

I don’t like the 22rf for foxes, I’ve lost a couple using it. But I reckon a 22rf mag would be fine.

So you will pick up your stool, shooting sticks and move camp so to speak every 3 minutes?

@Oldbloke You may know this site I just stumbled across it http://www.foxcalls.com/ perhaps you could give us your opinion on the sounds that the whistles make.

I have listened to them all and the sound that the tenterfield type is what I have been aiming at doing. I can make it more easily with the button I think but the tenterfield you gave me is much loader. Still practicing.

I saw a really thin fox run past out of the kitchen window tonight by the time I got the gun and everything together it was probably 10 min passed. I couldn’t get him to come back, I may have been upwind but I smelt like a wombat as I have a small orphaned one I had just picked up.