Being the first to admit that I like shooting a lot more than hunting, I’ve been trying to get a comp going at a club for a while. By saying - trying, I really mean thinking about and not doing anything about it. Like manifesting my thoughts into the cosmos, hoping that it will magically happen.

Tested. That did not work. So, a different approach was tested - actually doing something.

Ran a small closed group comp to test how things will work and get some failures shaken out. Then ran a proper advertised comp with minimal equipment and setup. I only have up to 50m to work with, so some creative thinking was required, but I am pretty creative. That was a lot of fun, few more learnings from that…

Total of 3 stages, 3 shooting positions per stage. For the uninitiated to dynamic shooting, stage is a section that you shoot and have a break in between; and a position is where you shoot from and then run to the next position and continue shooting, until you’ve shot from all position within that stage.

Stage 1: rifle on one barrel, magazine on the other. Run to get the ammo, run to the gun, load, shoot and then run to the other 2 positions (shooting ports on left and right). Had some old timers from ICOR help me with stage design (something easy and relaxed to start with). 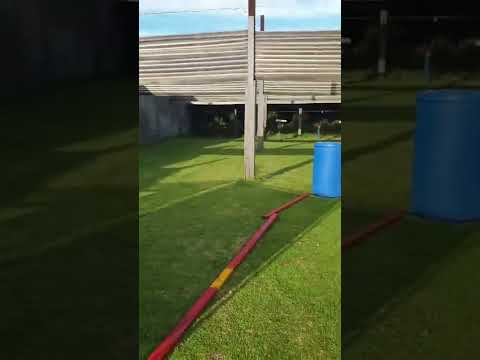 Stage 2 involved all my favorite sexual positions like dry humping the matts and a sex swing: The ‘sex swing’ is deceptively hard. Like, really hard. Especially on a timer and after you’ve ran there from shooting from other positions. I did however have mercy and replaced bungy cord for seatbelt material lol

That’s right, that sexy unit is @Supaduke (I will let him make up his own excuses). And @Tempestman hiding in the background somewhere

Stage 3: involved KYL rack. But what fun is bench shooting at a KYL with a slow heart rate. So before KYL could be engaged (on a timer) shooters had to stage the gun on the bench, then on a timer, load, run around, shoot a target on the left, run around again, shoot one on the right. Get that heartrate pumping…

What a fat piece of … I mean ,wow look at that specimen.

I have had better runs at comps. Not my finest day of shooting but I enjoyed myself. Had some magazine and ammo issues. Also these comps are great for reminding you of your non flexible body, sore backs and dodgy knees.

It is deceptively difficult, most of us rarely leave our comfort zone of a nice stable bench and static distances.

The comp taught me some valuable real world lessons on the importance of correct magnification on scopes in various scenarios.

Simply cranking on max mag is not the best solution. On one stage I had far too much mag wound on and had great difficulty with target acquisition. By half way through I was clueless what gongs I had and had not shot.

Very good comp though, some great shooters there.

My loss in Shotgun IPSC to @Supaduke has been avenged! Muahahahaha

Thanks for organising yesterday - was great fun.

It’s amazing how many mistakes you can make when you’re actually shooting under pressure with scoring and a time limit.

Forgot my full mag on the first stage, forgot to use my bipod on the prone part of the second stage, and finally forgot to crank up the magnification for the KYL.

Sex swing was very hard - especially the height it was set at. Had to really stoop to rest the rifle on it, though one guy was tall enough to just kneel for it.

Yeah, anyone around Melbourne wishing to test their plinking skills, let me know - it’s a monthly comp now.

22 bolt repeater any good for the match?

I shoot bolt action… So do most people. Need a few magazines though. At least 15 rounds worth. Only thing that’s actively discouraged is a tube fed magazine rifles.

Understandable…sounds good, i might give it a go at some point!

Bought an old but nice, Anschutz 22 5 shot repeater, be perfect for this!! At the Ballarat show

Depending if you have 15 rounds worth of magazines. It ain’t your grandpops target shooting comp

You going to come down next Sunday?

Na might, be 2 mags short, its smooth as silk action, heavyish barrel…love it!

It’s a mix bag, depending on stage and shooter. Keep in mind this is dynamic comp. So it changes things a lot. Personably I use RPR. I am yet to use 515, but I think next one I will try 96/22

T-bolt does well, but this is very much shooter+gun (obviously), lever release do well. Bolt do well if you run them hard. I have no love for RPR - so I thresh it

Dont mean to rain on your parade…but whats the insuring body for this match? I imagine MISC would not be interested with non members/visitors?? Just wondering as i tried a similar thing with the Ballarat club, but they were not interested because of insurance concerns.

I would think that as long as you didn’t exceed the ratio of members to visitors and also being a rifle comp, not subject to the harsher conditions of pistol comps.

It’s no different to any other club… X visits or Y visits is a moot point that’s based in politics, not policy.

So sign the visitors book, and its all good?

Mate, what are you fishing for?