Does anyone know which manufacturer uses this logo?
No, it’s not a trick question.
It does exist as a roll stamp on the rifle barrel, as do the cartridge type and serial number which are engraved, but there are no other markings on it. For clarity, I include a line drawing of same. any more hints, like which caliber, what rifle, etc?

Please note that this is NOT a quiz. The prize is for me, in knowing what it is.
I am trying to determine who the manufacturer is.
Calibre is 6.5 x 55.
RH bolt action, iron sights on barrel, drilled & tapped receiver rings for scope mounts, hinged floor-plate to the magazine (4 rounds?). Floor-plate release is inside the trigger guard. Stock has a pistol grip, chequering to forearm and pistol grip, a raised cheek rest (not a Monte-Carlo). Safety is operated on RHS of trigger. Rear action/bedding screw tightened onto a sleeve in the stock, Front action mount is a tang between the receiver and barrel.
It has a distinctly European appearance, not unlike a Sako or Tikka, but the logo is most certainly not either of those.
Thanks, if anybody can help.

Any other stampings as well? I think European made rifle usually have CIP stampings and stuff as well. Or other proofing stamps.

How old would you estimate the rifle to be?

Out of curiosity, I had a sniff around and can’t find anything even close. An approximate age, pictures of the rifle and action and any other markings or identifiable features would make the task at hand a bit easier.
Could be anything
A proof Mark, a logo, an acceptance or discharge marking. Is it a sporterised milsurp or a hunting rifle.

Looks like a stylized EB. Perhaps EBO. Edgar Brothers in the UK have a different logo, but it does have a modern look - perhaps this was an old mark of theirs?

To answer some of the questions, here are some pic’s.
I don’t know how old the rifle is, but knowing what it is might assist in establishing that. 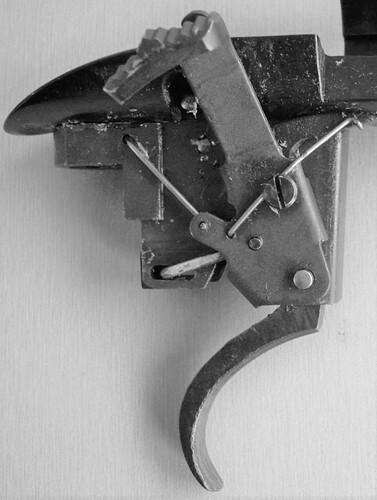 It will be interesting to find out. None of us will ever forget this logo into the future thats for sure. Nothing like a bit of mystery.

Im thinking you have a Carl Gustav.

The Hellenic Arms Industry (Greek: Ελληνική Βιομηχανία Όπλων, Elliniki Viomichania Oplon, abbreviated EBO) has been the main arms manufacturer of Greece. Its creation is linked to a desire of Greek governments for "complete self-sufficiency" of Greece in the areas of personal and other weapons (in contrast to past experience, when local manufacturers could only partially cover the needs of the Armed Forces). A proposal in 1975 by a big Greek chemical company, Chropei of Piraeus, for the adoption...

Could be a civilian version of their sniper rifle?
Logo could look like Greek lettering and 6.5x55 is a very European round

I think @Bentaz is on to something. The Fairfox 2000 rifle has threes lugs. How many does yours have @oldAG?

Ahhh, if only our government… never mind

Thanks JF.
Bolt is 3 lug.
The post by ‘Baribal’ seems to be right on the money.
From the pictures posted it is possible to see the EBO (albeit highly stylised) as on mine.
Greek, but it seems that most ended up in Scandinavia, which is where this one escaped from.
Mystery solved, I think.
Thanks all

Google-fu is strong with this lot!