Shooters Union, Australia’s PRE-EMINANT shooting organisation,??? Shouldn’t this be in the JOKES thread?
Anyone actually know the meaning of pre-eminant? FFS!
Talk about self aggrandisement.
“Fuck we’re good, just ask US”

Of course I know the meaning of pre-eminent. We can back our words up, too - we’re actually kicking goals, achieving things and doing something for shooters.

surpassing all others; very distinguished in some way.

Quote “Of course I know the meaning of pre-eminent. We can back our words up, too - we’re actually kicking goals, achieving things and doing something for shooters.”

Really??
Exactly what is it that puts your mob ahead of all others?
By putting forward the same proposals as everyone else and claiming it was your idea if it comes to fruition?
Tell me, how many members do you have?
Please give me a verifiable list of all of these “goals” kicked and “things” achieved.

We have a local state member of parliament here from SFFP, claimed credit for putting forward pro-firearm proposals, all of which were a cut and paste from SSAA proposals that pre-dated his election.

I get the impression you really just want to be cranky and have an Internet Argument with someone and I’m not taking the bait.

Have a look at our website (https://shootersunion.com.au/); that has copies of most of our announcements. The rest of them are in our member’s newsletter. Our most recent success (in the last month, as it happens) was changing the requirements for applying for collectible handgun PTAs in Queensland so it’s basically the same as applying for a club use Cat H - you no longer have to send an entire academic essay on why your old 1915-dated, military-marked P08 Luger is actually collectible.

Now, have you got something constructive to add to the conversation?

Not looking for an argument, just answers to my queries.
If you want me to join, give me VALID reasons.

My SSAA membership gives me:
The opportunity to participate in competition shooting, which I do.
The chance to represent my country, which I’ve done.
Access to ranges around the country, which I’ve used in every state.
Comprehensive insurance coverage, that luckily I haven’t had to use.
Constant lobbying and pressure on politicians on my behalf, although not outwardly obvious to the general membership.
Is there problems with the association, yes. Could they do things differently, yes.

So again I ask you, what do I get from your lot?

The first thing to keep in mind is that being a member of a pro-shooting organisation isn’t an exclusive, “you must pick one” thing.

From our perspective, you absolutely can be a member of the SSAA or ADA or NRAA or whoever and still be a member of us. We’re all shooters, after all.

Think of us as being a pro-gun NGO. We don’t run ranges (at present), so we can focus on lobbying and representing law-abiding firearms users. That means that, for example, when the NT decides they’re going to reclassify guns arbitrarily, we can get on it and start lobbying the appropriate people up there to do something about it (ie, change the classification).

In Queensland and NSW, we are a Genuine Reason for having a category A&B firearms licence, we have public liability insurance for our members undertaking hunting and approved events at ranges.

Lastly, and most attractively to many people, our annual membership is only $35 per year.

If you want to shoot competitively at national or international level, we’re not the organisation for that at the moment - but fortunately, there’s several organisations in the country that are superb for that. If you want to know that someone’s actually fighting for you - and will show you what they’re doing - then we’re your people.

So, nothing more than I already have then. ( Actually, a lot less )
I associate with both state and national executive members within SSAA so perhaps I have a better idea of what goes on behind the scenes.
Are they perfect, not by a long shot. ( pun intended ) Is there more they could do, yes there is. Have I been screwed over by them , occasionally. Have I had run ins with over-zealous range officials, on many occasions.
But, overall, I believe they are doing a good job supporting Australian shooters.
I have previously had these discussions on this subject matter with both members of this and other online forums. The SSAA is a sporting organisation not a political party or lobby group. This is why they cannot align themselves with any political parties. They do a lot of lobbying on behalf of shooters but have to be careful of what they do politically. I dare say that you know this full well but it suits your purposes to claim to be the better option for shooters.
Claiming to be the pre-eminant body is a huge leap.
Convincing a bunch of dis-enchanted former SSAA members and others to put their money into your organisation instead hardly makes you that.
Good luck to you, I won’t be joining up any time soon.
( P.S. Say hello to Jan L from Dalby for me.)

They have both are right. The Shooters Union has said it is a lobby group fighting for rights. It is not a shooting organization. Danmac is only stating that they have over stated their importance (that is not the correct word or term) Shooters Union correctly points out that membership of multiple organizations that work in the different sectors and with different goals and prioritizes is a good thing.

My opinion is exactly that, Membership of different groups that are working on different things is a good thing. It means we as shooters are working on a larger front. One organization can not do it all and they shouldn’t try to do it all as each area is very different. Danmacs point is that they should not over advertise themselves as the best and the be the one group exclusively

I hope the Shooters Union does not go into trying to run ranges and competitions.What they are doing is needed and they should focus on that. Rather than muddy the waters and actually dilute that multi pronged front to the government.

Keep in mind our external messaging is aimed at journalists and politicians, too. When I say “country’s pre-eminent organisation representing law-abiding firearms users” in an external communication, that’s telling journos and pollies “This is an actual, established organisation that is qualified to be commenting in this space”.

And to put things a bit more bluntly: The time I spend answering bad-faith questions from someone who’s already made their mind up that they don’t want to support SU, and instead, for some unknown reason, wants to have a go at a shooting organisation that’s openly said we work on behalf of all shooters is time I’m not spending putting together press releases, doing background briefings and compiling factsheets, identifying the appropriate MPs to contact about issues, putting together policy proposals, or any of the other things my role involves.

The more organisations that are working towards representing us shooters is a good thing BUT if they could work together instead of separately, some with their own agenda, would be more beneficial to all.

Why we can’t get a single organisation together that can do all and represent us with a greater presence IE: more members, like the NRA , where we can then have the power to change the laws/understanding of people has me beat. Got to give it to the Americans, they fail at a lot of things but in this regards they succeed well.

I can imagine the membership numbers such an organisation in Australia would have if all parties joined forces not to mention the political pull it would generate.

Wow. This is a joke right?

Christ, if you don’t want to join the Shooters Union don’t bloody joint it but why actively attack an organisation that isn’t hurting your cause either?

Cleaned this mess up. On topic and factual please.
@Oldbloke need a new meme please

you are the new Meme Officer. 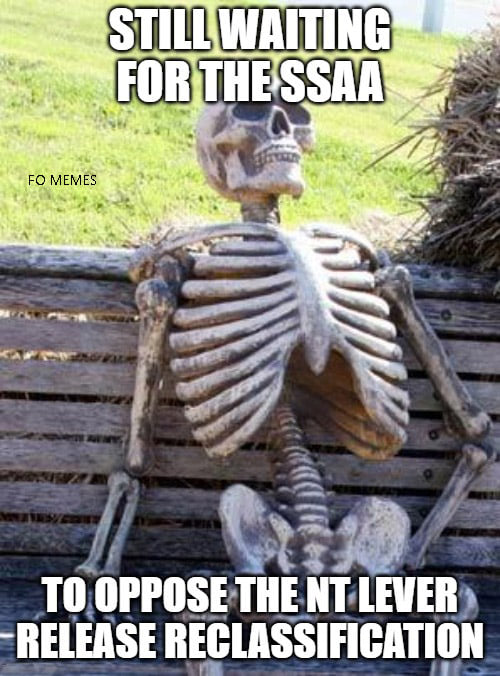