A while ago I watched this video (below) and decided that I wanted to try this.

At some stage, I ordered a carding wheel (tool specific to this exact task), because I wasn’t going to scrub this shit by hand, ever. I cleaned up a rifle with steel-wool once, never again. Looks like a wire wheel, but it’s ridiculously soft. At full speed, you can shove your finger in tehre and it won’t draw blood. Anyhow, this is one of those things that is specific for the job and has no other applications.

The only thing that was missing, for me to kick this off was a box (more on that later), which I found on a side of a road couple of days ago (@Supaduke - simple things). All components at hand, I thought - time to start this party.

I got my hands on some of the solution used in the video and started thinking what I could sacrifice to gun gods. At that stage, it had to be something sacrificial, because it could go either way really.

…and as luck would have it, high excellency, @bentaz had a spare rust pipe that he donated to science, in a form of Lithgow SHT.LE III 1920. Converted to 303-25 at some stage. Good bore, missing rear sight parts, mismatched stock, rusty as hell, scratched, dinged, etc. Pretty much shit you’d cannibalise for parts if you were missing a screw or a nut. Shot though, so there was a chance. I had my phone closer than the right punch, so the rifle is not fully stripped here, but it was… One thing to note, I don’t have good natural light in the garage, so communicating good and bad details is not trivial, will annotate when needed.

Here’s my trying to capture some details of the original state.

unsolldered-sight675×900 475 KB
front sight removed, I am used to working with a blow torch after a few guns like that These (above) are the ‘before’ images. Very hard to capture how mungee that thing was. Yet, this is in essence a true milsurp conversion to sporter, with some hard core history behind it. So I definitely wanted to keep it.

Now, you ask, why is there a hole through the barrel? Well, because fuck you Sportco, that’s why. It took me two days to figure out how to remove the rear sight.

You see, what this c*nts did, was to sleeve the rear sight on and then punch a pin through the bore. After that, tey flattened both ends and machined the top and both sides smoother, so tapping that mother fucker out is near impossible.

At first, I thought it’s soldered on, like, oh, I don’t know, majority of this type of sights… Top screw and solder. But noooo, nooooooo. Then I thought, hrmm that’s a lot of heat and a lot of tapping, there must be a pin, but where the hell is it?

So I grabbed some steel-wool and started rubbing and behold, a faint little outline where the pin was blended with the sight. At that stage, I was happy Sportco fucked off in a blaze of hell fire.

I actually assumed that there was a pin from the start, because I ran into something similar when I was fixing my Martini Henry. So I did use degreaser, steel-wool, I just didn’t see it and assumed it’s not there. Nope, was there, permanently machined into a fucking barrel, because like, hey, nobody ever changes sights. Fucking muppets.

Then, I started thinking, how the hell do I take it off? I wasn’t going to drill through the barrel… Because, oh, I don’t know, because it’s a fucking bad idea and I didn’t know the angle it was on, but also, because drilling through a barrel is a bad idea! Measured the thickness of the side and drilled out as much as I could, without going further. Then, very, very, very slowly and even more carefully cut the rear cross-bar so to speak that held the sight together and split the c*nt in half. Rest in photos. Ridiculous.

Front sight was done in sort of ‘posh’ rifle style. Held by a screw and soldered. Really, there was no need for that. A dovetail with a screw would have done just fine, like most old brownings, K31, etc. Or even, just a dovetail. Anyway, I came down from my rage at incompetence. I came very close to slamming that thing against the concrete and dropping it off at my LGS, but coffee and sleep prevailed.

Rest was by the numbers, pretty much like in the video. The steam pipe… Basically convert all rust to, what essentially is, bluing. Two cycles of that. To start, and then to finish. About 15-20 minutes on both ends of the process. This prevents further rusting and converts existing rust (large chunks were cleaned up by hand) to bluing.

Some lessons learnt here, mostly to do with construction of the steam pipe. Will make a better one next time. to try it out, I just grabbed a saucepan and steamer from the kitchen. Wife was a little confused, when I said, I am going to steam a rifle. Worked well for first time.

After the steam pipe, it comes out with a layer of rust, but nice black underneath, after wheel treatment.

In the middle, coat the rifle in solution, dry for an hour, coat again and into the sweatbox for an hour (below). Above: vaporiser running and rifle hanging in the box.

This is how the rifle comes out of the sweatbox. Rust, but booootiful bluing on under it.

After removing all of the rust, steaming the thing again and removing rust for the final time, here’s what we have. 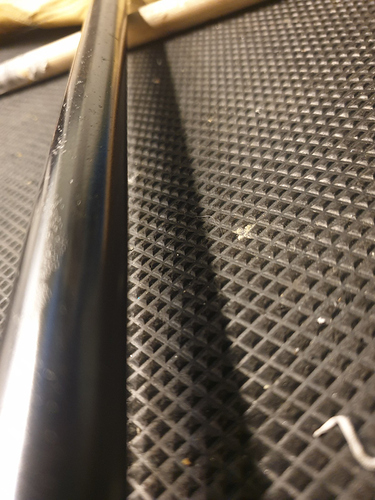 Still a few blotches, this is most likely me not heating the rifle and the sweatbox enough, before it goes in the sweatbox to avoid condensation. But most of it is gone now and I think it looks a hundred times better than it did. That’s about it. Got a coat and a good bore scrub with kerosine, to displace what’s left of the moisture and currently setting until tomorrow. Tomorrow, coat of gun oil and we are good.

I’ll have to dig out some contacts for you, for the local dude who does it. Keep in mind, you do that to any of your milsurps and they are immediately worthless.

Is carding the rust off as satisfying as it looks on Anvil?

I’ll pass on your kind regards

Punch him in the nut!

I wonder if he worked on the saftey’s of the Slazenger 22’s as well…?

Slazengers are from Lithgow mate, not sportco if I remember correctly.

Fantastic work - thanks for sharing! It looks like it’s come out beautifully.

@MaxJon - I think you are looking for this thread…

Yes I am thanks!

Where did you get your bluing solution?

I’ll have to dig up the email…

Any joy with the blueing chemical info