Both in 22, both modern (modern models, not vintage). Both look sexy to me. Remington has this classy look about it, Henry has a plinking funky look about it. If you could only pick one… Which one and why?

What about some pics and links to info on both of them. Im to lazy to go and do all that myself.

Lot more dollaridoos for the remy.
I love Henry’s but would grab the Remington if cash wasn’t an issue.

Although a fair bit more expensive, I have handled both. The Henry is well built and functional.
The Remington is all steel and generally a bit nicer. High gloss stock (if that’s your thing) nice blued reciever. I wouldn’t be sad with a Henry but in a direct comparison, The Remington is the nicer rifle. 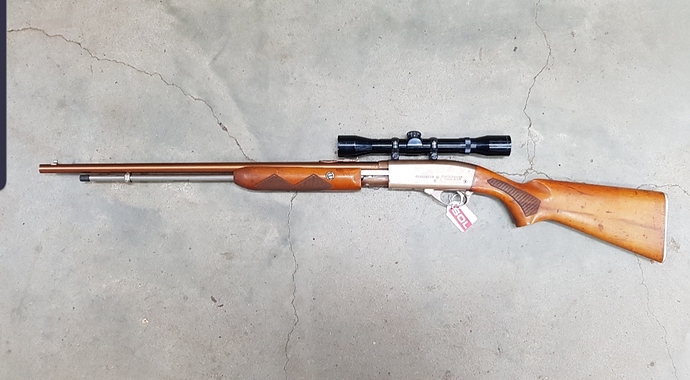 My remington ain’t all steel

Google fieldmaster 572 buck skin tan
This is my actual firearm I got a couple of years ago off these blokes.

The Henry pumps are nice in octagonal barrels. I choose to get them all but. The original Erma Werke eg72 made in Germany which I’m pretty sure the Henry H003T is a copy of and a nice rare Remington 572 Buck skin tan model… I like the Henry’s/ Erma’s because they have the exposed hammers to decock them but some people don’t like the bolts coming back at their faces on the stock so if that’s a issue 4 u go the Remington 572

Henry is definitely a clone of Erma, I think.

Issue? You make it sound like I’m all practical and shit. You just like pumpies. I am leaning towards Remington. But like you said, Henry with octagonal barrel is sexy.

Well the one I held sure fooled me. Looked like all steel. Nicely blued.

Turns out they used painted and anodized aluminium for the reciever. I never knew.
Still, the ones I played with seemed very nice.

I also prefered the pistol grip on the 572

I think 572 is just way classy… Nice range gun and what not. Would not take it bush lol

Great, and now I want one.

Would go well with a peep sight as a plinker for sure.

Great, and now I want one.

That makes both of us.

2 posts were merged into an existing topic: Gun adds I wish I could buy!

It go the Henry, but I’m old fashioned.

So have you made up your mind which one your going to buy first?
Coz you know you’ll get both eventually!