The Australian Senate has passed a motion brought by One Nation banning the use of “distorted” gender-neutral language such as “chestfeeding” in official government materials.

Well, at least some common sense…

And then we have this little gem (part of the article):

Pure gold! Read between the lines here. While she tries to legally force people to use terms they want people to use (control what we can and cannot say, definition of group identity? Scary unmaintained communist carnival ride right here, ready to crash any second now) - she gets to eat some shit by experiencing the very same thing she advocated.

The irony here is hilarious. Can’t have it both ways.

Sounds like some fun was had. Still, they couldn’t agree that in Australia it is in fact okay to be white when old Pauline tried to move that motion in…gosh, all the way back in 2018. 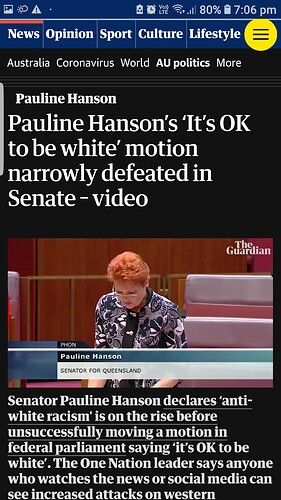 Senator Rice is deeply emotionally invested in transgender issues. She believes that her husband transitioning after 16 years of marriage meant that she (Rice) was actually bisexual that whole time without realising it.
Try and wrap your head around that one.

Well there’s no way out if she wants to subscribe to that insane ideology.