If there are any Erma-Werke EG72 (West German, yes, West, from '50s - '60s around there) pump action 22LR owners here, maybe it will help. Another project gun that needs some TLC.

I got kicked out of the living room, so I thought, yes! I will take it apart and look inside, see how it works and start seeing what’s going on. I had to work on the lifter a little bit, was beaten up and needed smoothing to engage ejector better. Henry is a pretty close clone of it. So I thought I will kill two birds with one stone. I will start working on this and at the same time learn how Henry fits together, more or less.

I usually take photos as I go, to know what goes where, but when I was pushing one of the pins out (that required brute force) of of the retaining pins in the action popped out, springs went places and I wen’t - well, fuck! So, with a little bit of tinkering, it was back together again and then apart again to continue working on it. This time took photos as I went, so this may help others, because it’s not exactly a common rifle.

Mostly, just my running log, so I know how to unfuc… fix it again, in the future. (two nested springs, in case things go flying, there are 2, not one)

Worked on the lifter a little tonight, will see how it goes when I get a chance to put it together (again) and then start on the trigger group and the rest of it.

Is the frame steel or alloy?

Correction. Frame, I didn’t look much, but think it may be steel. The top part that goes over the action (top image: top centre), I’m pretty sure is alloy of some sort.

Henry is a pretty close clone of it.

Yes, @ShootersUnion, it looks pretty much identical. I haven’t dug in the guts of Henry yet, but like I said in the post…

P.s. I doubt it’d be identical. Ejector could be improved a lot and I’d be surprised if Henry didn’t improve at least that part, but stranger things have happened.

Henry do strike me as the sort of people who would take the time to make that improvement, I agree.

I don’t believe you could improve on zee work of zee Germans!

More to do with use and abuse, then the original work…

Time to finish this one… Lockdown boredom prevention… This has been sitting in a an ice cream tub for 8 months. 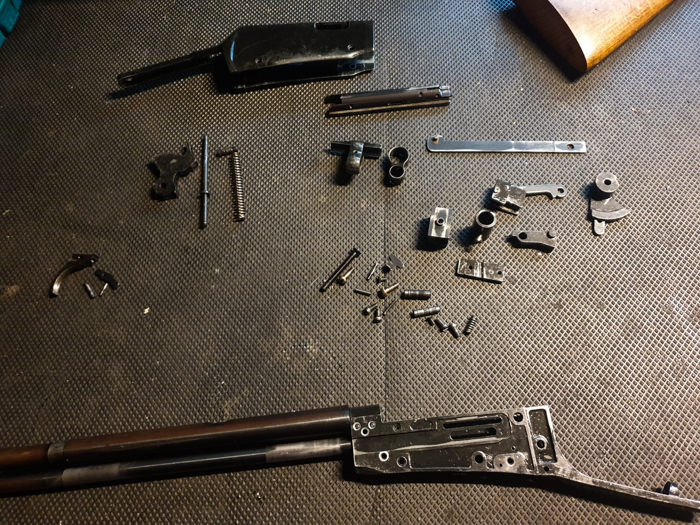 Yeah, Lego is fun, especially when there are no instructions. Schematic helped and photos above helped a lot! always take work in progress photos!

The bong is ready… At this stage, I could pretty easily re-blue the barrel and make it look brand new, however the receiver cover (@Supaduke) is some sort of aluminium alloy and it just wouldn’t gel. So preservation and rust removal, no referb, until I learn how to work with alloy. come to think of it, I could blast the finish off and Duracoat, but it’s just not worth it.

Better view of the markings (there’s also a serial number, I hid it in the pic, mine is pretty low). Pretty cool in my opinion.

Tried to soak a bunch of wax in, wood did come alive a little. I was considering full referb, but because I couldn’t get the receiver cover looking new, I settled for wax only. @Nomis - that clamp recommendation… I found another use for it. Fixed the ejector, which was the main culprit behind this adventure and filed some bolts to make it run a bit smoother.

@Martini, now that I dug around in there properly… It’s pretty close to Henry, but there are significant differences where it matters. The reassembly is a major PITA (better in Henry, unless I didn;t get the technique right for Erma, but I doubt it). The ejector position is so bad, different in Hen. The lifter is also reworked in Henry.

It took me 30 minutes to get 99% assembled (only had to look at the reference photos once to see where one of the pins had to go) and hours to get the bloody bolt and cover on. Factoring in a pathetic ejector position which basically translates to it flying out every time I looked at it the wrong way, before the cover is fully on (spent a lot of time crawling on the floor looking for that little bastard). I am never taking that bitch apart again (probably like ‘I am never drinking again’ statements).

Rear site is missing, so I am using some cheap fixed scope, good enough and gels well.

Unfortunately, while trying to get the cover on, I snapped the tip of the hammer spur off. Angle of the photo makes it hard to see, but if you didn’t know what you are looking at, it wouldn’t be apparent. Partially my fault, however looking in there, looks like some shitty alloy anyway - was bound to happen sooner or later. Tidied it up with a file and we are back.

Another one for the vintage 22 pump collection, done! I have no more outstanding project guns! Woooooo!

Looks like a good project.
Bit of a mouse trap action by the looks.
I need a little project myself.

Bit of a mouse trap action by the looks

How do you mean?

You have been busy! Now you just have to get to the range and let us know how it shoots

It shoots fine. I did test fire it before it went on the operating table. A lot of pins and moving parts.

By the time they are allowed out to go to the range, he would have pulled it apart again atleast twice