Cleaning inside the bolt (Lithgow mod 1)

Picked up the Lithgow mod 1 the other day - finally got a chance to shoot it. The whole rifle shoots pretty well, but there’s a bit of an issue with misfiring. Works 4/5 times.

Not a huge deal, seeing that you can cock the rifle without opening the bolt, but the firing pin doesn’t look bent of chipped.

I’ve read online that it could be a weak spring, or too much grease inside the bolt. Trying the easy thing first, seeing that the bolt has open cut outs, is there an easy way to clean the inside of the bolt and the firing pin spring? Ideally something I just spray in like canned air for the PC? Would like to avoid taking it apart.

TL;DR: Is there an easy way to clean the firing pin spring inside the bolt action?

Ah bummer - even when I can see the most of the spring with the way the bolt is cut?

At least I found a good video on how to disassemble the bolt. Apparently the model 1 copied a lot of stuff from the Winchester 67, which has plenty of resources online on it. Fingers crossed I don’t screw it up.

Might see if I can get carby cleaner and a fine brush up there. There is some oil in there that looks like old engine oil.

Why don’t you take it apart…

I guess if I can’t put it back together, I could take it to a gunsmith to reassemble it kek.

It’s only scary the first couple of times and when you snap a pin or something. But it’s not scary most other times.

Soak it in solvent and high pressure air? Thats one wide open bolt you got there.

Alright, been trying to take it apart.

The two pins are refusing to come out using a punch. 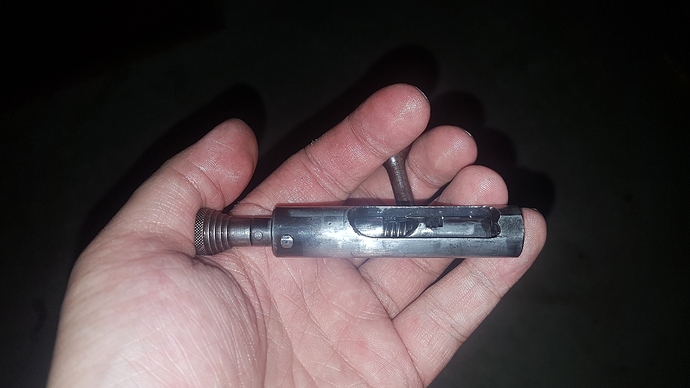 One isn’t moving at all, I’ve actually marred it with the punch.

The other doesn’t have a reciprocating hole to come out from. Haven’t been able to get it out with pliers either.

I’m trying your solution now, got it in some mineral spirits for a bit of a bath.

Being so open it should clean up with various sprays. Start with Brake Cleaner that will remove any previous dried up oils. Then flush with Lanox or WD 40. Use the Air pressure from a compressor to blow any stuff out. Lube it with Lanox and just work it. It should free up.

Yeah, roughly what I did in the end. Soaked it, let it dry out, and a healthy coat of inox.

Mineral spirits bath got a fair bit of it out. Another way would have been to use an ultrasonic cleaner, that should get into all the nooks and crannies.