Has anyone here got one of these or knows someone that does?
I’m after some feedback. Like most people i have one of their swags and a little genny too and i can’t fault either of them, especially for the price.
Im thinkingi g about getting a 12v fridge mostly to use in the shed up at my property as ive got solar set up already, buti will use it camping / hunting too.
Anyway, any feedback on these or any others you have would be appreciated.
Cheers 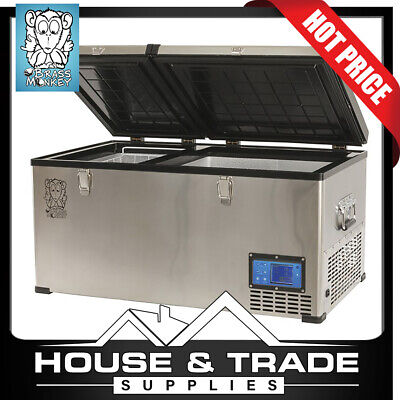 Keep your food frozen in one compartment and your favourite drinks and fresh produce chilled in the other. This great looking chest-type fridge can be powered from 12V or 24VDC while you’re travelling, or from mains power at a powered site or when...

Anyone know about these ones?
Looks pretty good to me, but then i know sweet FA about them.

A Peltier device type fridge works well enough and uses less power. You could set one up to run directly off a panel (no Battery) and it’ll cool when the sun is shining.
Limitations are they only cool 20 or so degrees from ambient and the outside heat sink heats up.
120W 12V Thermoelectric Peltier Refrigeration Cooling System Kits Cooler Fan 890271242519 | eBay
That’s the way cheap car fridges work, build one into an esky and its good enough for a cheap bloke on his own in the bush off grid (from experience).

Mate I have one of the Brass Monkey fridges, not as big as that one though, think mine is about 22Lt or there abouts.
I did a bit of research prior to purchasing and there were mixed reviews.
Mate it is a bit noisier than my other fridge (ARB) however I rate it highly. I have had it for well over a year now running it in my car mostly. Hasn’t missed a beat.

Was just about to mention brass monkey, kings is a bit of a way for me in WA but locally jaycar have them all, i’ve had a 25 litre in the back of the ute for a few years now, been up to the pilbara and all, not insulated as much as i’d like but its still keeping stuff cold

Thanks mate, ill look into that idea.

Did you just hook a 120w panel up to the 120w peltier or will it work more efficiently with a bigger panel? I have a couple of 300w panels im not using.

I’d go a Brass Monkey over a kings, personally i think kings are shit. i Tried one of their solar blankets which delaminated at about 11months old (used twice) but by the time i got around to ringing them it was 12months and one week old and their response was tough luck it’s past 12 months old…Fuck Kings.
But apart from my hating on Kings the Brass Monkey has better warranty 3yr vs 2yr, plus it’s sold at a bunch of places all over the country, so if you ever have an issue while travelling it would probably be easier to get things sorted.

Mine was just a small Peltier with big heatsinks and no fan, 25 watt I think connected to a 50 watt panel. It was a long time ago and things have changed. If you have spare panels a commercial 12v fridge and a deep cycle battery setup may well be the way to go.
Back when I was doing it all this stuff was ridiculously expensive.

I have an engel and a waeco. The engel lived in my Pajero running every day for 5 years, it now lives in the camper and gets occasional use. The waeco has been running every day in my Hilux since Jan 2014. The temp controller had a hissy a few years ago which meant it maintained temp but was running constantly, turned out to be an easy and cheap fix by the Waeco service centre in Adelaide. Its been running constantly for about 4 years since that happened. I’ve been very happy with both. I had a peltier cooler fridge, was very disappointing, beers were never cold enough. I pulled the 3 way fridge out of the camper and dumped it, the engel/waeco both work heaps better.

Went into Jaycar this morning to order the above brass monkey fridge, but ended up walking out with a floor model of 75L Brass Monkey Dual Zone Portable Fridge or Freezer with Solar Charger Board and Battery Compartment | Jaycar Electronics
For $499. Happy days, i think ill spend the difference on a bigger inverter for the shed!

I gave the fridge a good run over the weekend at the farm, i had some teething issues to start with.
Turns out to control most of the functions you need their app, but i didnt learn this until i was out bush with only the most basic phone service, then i had to figure out how to Bluetooth a thing. I had managed to live 45 years without ever needing to know that!
When i get a new phone i go through and delete everything possible and turn off the permissions for everything else. I might be an admin on an internet forum, but i really hate technology, I thought of just shooting it and lighting the gas fridge, but i didnt have a gun. Anyway, I got it sorted out in the end and it did keep the milk and tins cold.
I did run it in town to set the temps and get it cold before I left and it was fine, wasn’t until i got to the farm and plugged it in to the 12v that I had an issue. I have a power cord with an anderson plug coming for it, but just this time i had to plug it into a ciggie lighter plug, but the one i have set up normally only gets my little camping fan in it and is on spaghetti wires, when the compresor kicks in it was drawing to much current and tripping the low voltage fault on the fridge.
The app allowed me to change the voltage it would fault at down to 9.5v and change it over to eco mode which fixed it temporarily.
I’m not sorry i bought it, but I’ve changed my mind about selling the gas fridge.

I don’t know if it’s worth your time, but I rewired the front cigarette lighter in my Range Rover straight to the main battery with heavy, 40A stereo power wire to run a small kettle I took to work.

Never had a problem with it, except the fuckery of finding a way through the firewall.

Doing wiring is no issue mate, its in my shed thats on solar.

Dont do away with the gas fridge until it leaks gas like a sieve. They are a special breed of dinosaur.

All i heard was “but i didn’t have a gun.”… What the absolute fuck?

I had the old dog with me and she is scared shitless of any loud noises.

Almost tempted to grab one of these

Im tempted to grab two. One for meat, and one for the coil of a beer keg like Pat Callinan. Like, Id just fill the entire thing with copper coil so I should be able to pour 10 pints od ice cold beer before having to back off.

More and more, I wish I had a single cab. Screw the kids.

Surely they’ll fit on the roof rack…
Might need some goggles but ratchet straps will hold ‘‘em down pretty good.

Without wanting to offend anyone, I’ll relate to an advertising campaign that ran on T.V throughout Central Australia a few years ago.
The ad’s showed an indigenous bloke driving down the road with a couple of dogs in the cab of the ute with him and his missus and kids bouncing around in the back. The ad had a voice over that said,
“Hey bloke, you should put da missus and kids in da front and da dogs in da back….”
Another one in the series showed a car tear arsing down the road on the verge of being out of control. This time the ad showed a bunch of fellas in the car, no seat belts, windows down, dust and rocks flying everywhere. The voice over comes across," Hey bloke, when ya drive on da dirt road, slow down!" The ad then shows a skinny black foot, barefoot of coarse, pumping the brake pedal.
It then adds, “and put da seat bels on!”
We used to do a bit of travelling out through the centre and the remote communities, the amount of wrecked cars made you wonder how often and how badly people were getting injured.