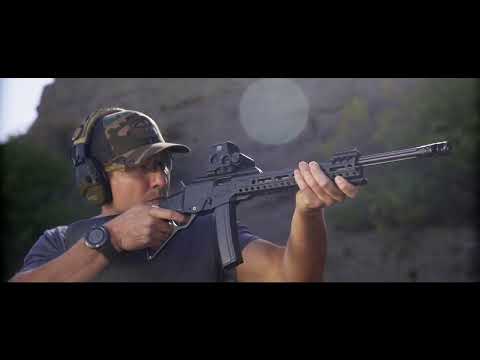 What’s new is old again… I am not sure how I feel about this. I mean, of course I want it, but also, I kind of don’t - interesting, nevertheless. Exposed hammer isa turn off on a gun like that. But box magazine is a turn on. Mmm internal conflict.

Cleaver has them as due-late-march for $3290 and an odd $100 each for an extra magazine. I can see positives, 3-gun Australian edition for example. Since most pistol shooters shoot on a handgun range and 3-gun would be for pistol shooters moving into rifles, not the other way around… This rifle would be rated for those ranges… Could be an absolute game changer for the sport. Or a flop.

Seems way to expensive for what it is, and 9mm being so piss weak in a long gun you might as well save a fortune and shoot a 22 instead. Your wallet would be the only part of you that could tell the difference I reckon.

That’s really expensive though, but hopefully it does well.

Yeah, it’s definitely a sporting rifle, not hunting, for ipsc and such.

Will we get 20 round mags??
Im thinking not…

My initial reaction was that a lot will follow, seems like a new niche. Which is good.

Impression of the rifle, I would have thought that at a minimum for a tactical model you’d want an enclosed hammer and bolt. Exposed hammer just doesn’t do it for me on a supposedly tactical offering. Did a quick sanity check with my kid, whos all about black and tactical (although loves vintage stuff) and his first reaction was the same, exposed hammer makes it look a bit old school, doesn’t gel on a tactical gun. Was interesting to hear him without me skewing an opinion. Pretty much the same feedback.

Right direction imho, not impressed with the execution. I understand the complexity of extraction with an enclosed hammer, but nevertheless… and QD shroud and QD lever for easy cleaning and chamber end access.

For Australian sports however, especially IPSC and even 3 gun on smaller ranges this could be a complete game changer.

P.s.
The price tag though… Ooof.

Yeah its a cool target gun, cheap to run…maybe…maybe not…

All things being relative, it’s probably the cheapest of centrefire cartridges to run, still in cents per round, instead of dollars.

Got an email advertising this today. Damn ugly.
(Standing by for incoming after that comment.)