I put together a few gifs showing the results of 12 years of research into the 44-40 pressures. Started pressure testing loads in 2018.

Details of the results can be found on the 44-40 website here: Chasing the 44-40 - Pressure Testing

Out of all of the tests that I have done, the shooter will far exceed the SAAMI 11,000psi/13,000cup MAP pressures before seeing any “flattening” signs of the primers.

If you are loading high pressures for the Model 92’ rifle, you might start seeing primers getting a bit flat on the surface at 18,000cup, which was Winchester’s 44 WHV service pressure. I have never seen primers flat enough to even begin to fill the primer pocket rim.

This would be a good test for future references. Maybe if the cost of primers come down, I can preform such tests.

While the '92 Winchester action is stronger than the '73 it is not really a strong action by modern standards. I’ve seen folks totally stuff a good gun (both originals and modern replicas), by chasing higher velocities because they thought that was how to do it. Stick with velocities that duplicate blackpowder loadings and you’ll be fine. You might find that they tend to be quite accurate as well, after all, that’s how the cartridge was designed to work.

This is the exact myth that gets folks in trouble. Using fast burning powders to achieve original ballistics will get you in trouble. Do understand that the older powders used below could have deteriorated and could have actually produce higher pressures during their time. 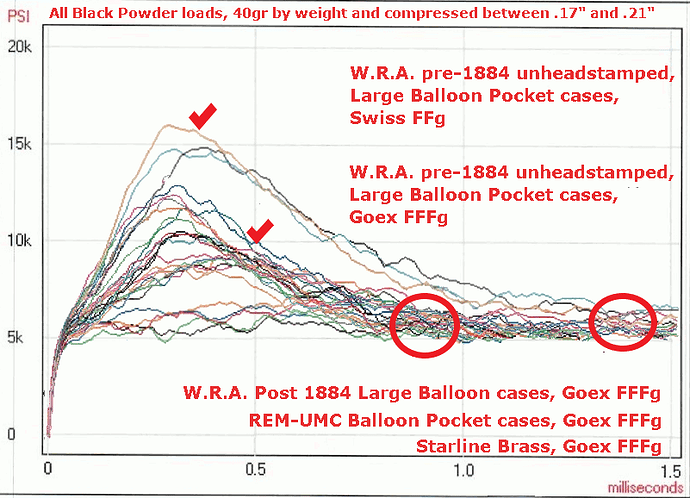 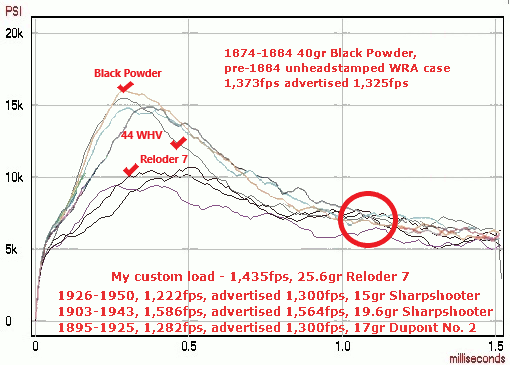 Give the following gifs a little time to load.

So, wouldn’t you choose a powder that replicates; as close as possible; burn rates of the original loadings and stay within or close to pressure spec?

Not that I have any experience with this cartridge. In reference to @danmac post; if you’re looking for higher velocities (and I mean velocities well beyond what is the norm for the cartridge), wouldn’t you just change to a different platform that safely offers results within the parameters you seek?

Yeah, you lost me. Who said anything about using older powders? Maybe I should have said, lower pressure low velocity? I don’t have a u-beaut pressure barrel but I do shoot a bunch of old '92’s. The only time I have seen any trouble is when folks think they can stoke them up to 44mag specs.

Gwion/danmac YES, exactly! But the answer needs to be explained so others will understand.

Now I have to explain the smokeless powder transition for the “44-40”. In 1895 Winchester offered the first smokeless powder for the 44-40. This new load used Dupont No. 2 “Bulk” rifle powder. This new powder occupied the same exact space as the black powder loads but only weighed 17gr. This new smokeless powder produced LESS PRESSURE than the black powder loads of that time and were advertised at 1,300fps. I tested 17gr of Dupont No. 2 in some of these older cases and achieved a lower velocity of 1,282fps @ 10,190psi or about 12,045cup…again lower than SAAMI’s 13,000cup MAP. Winchester used this powder from 1895 to 1925. Although the pressures were about the same as the later black powder pressures from the late 1880’s, there were certainly lower than the pressures prior to the 1884 time frame.

In 1926, Winchester switch from the No. 2 rifle powder to Sharpshooter rifle powder. Another slower burning powder made for rifles but did very well in revolvers due to their burning qualities. I only tested 15gr of Sharpshooter in 1940’s cases and achieved 1,222fps @ 9,176psi which should be about 10,846cup…much lower pressures than Dupont No. 2, but similar velocities.
.
Where the subject hits home
Winchester switched powders again by 1960 to a flattened ball powder, then to a ball powder and then by 1979, to a disk powder of which all are now PISTOL POWDERS. The velocities and pressures continued to decline during those years as my tests reveled. I’ll keep it short by just sharing the 1992 factory loads. These 1992 loads used 8gr of a disk powder (commonly referred to as flake powders) and only achieved 1,025fps @ 6,650psi, which should be about 7,860cup. As you can see the velocity suffers greatly with modern loads and has given the 44-40 cartridge a very bad reputation. Increasing such faster burning pistol powders, rapidly increases the burn rate, when trying to replicate original 1,325fps velocities in a rifle, thus can cause the “pressure spike” you hear about, which can somewhat be seen in the pressure curve charts and gifs I offered.
.

In order to achieve original ballistics with the 44-40 in a rifle, the shooter needs to use a powder that replicates the burn rate close to the original powders. If a person studies the gifs and charts I offered, they should be able to see what powder it was I was hinting at that seems to best replicate such performance. If a shooter wants good performance in a revolver using the same cartridge as a rifle, he will have to use such a powder or suffer in performance in one or the other.

In the modern world of powders, rifles need slower burning powders while revolvers need faster burning powders in order to achieve max performance (I did not say max pressures). This is why the 44-40 was and will always be a rifle cartridge, that can be used in pistols.

I have offered such information here Me and my 265 yard target showing hit placements in comparison to those of Swiss sharpshooters during the 1866 Swiss trials in Switzerland (1866 44 Henry) as well as John Korts 44-40 black powder loads, loaded to 44 Henry ballistics.
I also checked the IMPACT VELOCITY of my loads at 265 yards to be 951fps, same as a revolver at the muzzle and faster than most “Cowboy Loads” in a rifle!!!

Are there any visual pressure signs that can be used?

I guess that things like flat primers will not happen or if they do flatten the gun would already have blown up well before that would occur.