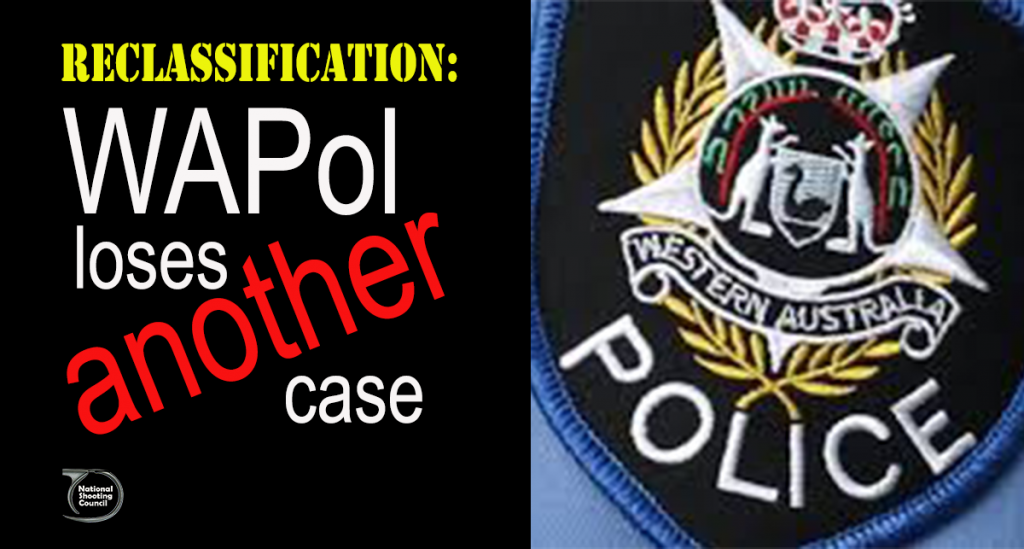 WAPol’s registry simply can’t win a trick against the NSC.

They have lost yet another reclassification case against a shooter who started his own action, and helped along by the NSC.

That brings to 4-0 the number of cases we’ve run or helped to run against them (one on the gun shop closures, two on the Ruger PC Charger, and now one on the Desert Tech SRS).

M turned to NSC after being shunned by SSAA

A few weeks ago, we told you about “M“ who owned a Desert Technical SRS, which WAPOL reclassified in June last year. WAPol told him they were acting on the instructions of superiors by revoking his authority to have the gun, and forced him to surrender it.

M is a life member of the SSAA, but got shunned by them when he sought their help. Aware that the NSC was fighting a similar action on the Ruger PC Charger, M contacted the NSC which took the matter on.

As happened with the other matters the NSC was running, WAPol argued that SAT did not have jurisdiction, and relied on the case of Commissioner v Killen. WAPol argued that the Killen case found that decisions by the Commissioner to reclassify a firearm was not appealable – despite Western Australian legislation saying otherwise.

The NSC’s barrister and M then formulated a careful and solid legal strategy that resulted in that argument getting rolled. This means that the NSC has overcome a legal hurdle for shooters in WA and opened the way for more challenges to reclassification in the future.

A few hours before a hearing scheduled for a few days ago, the NSC got word through its barrister that M not only got his licence back but WAPOL will also refund his SAT application fee.

This is a really good win for shooters in WA and stamps the NSC’s authority as it continues to fight reclassification decisions by our registries. This fight is the thirteenth legal fight that the NSC has either started or helped shooters with.

It’s definitely a ‘slow road’ to take but paves the way for the eventual dismantling of our appearance laws, which simply have to go.

M has thanked the NSC for being the only shooting organisation to provide the support he needed to win the case against superiors in the WA firearms branch.

After another recent win by the NSC, a SFFP supporter posted on Facebook and said:

“Last I looked, the NSC hadn’t achieved a single actual win in the courts. What they are claiming as “wins” are issues that have been resolved outside the courts, probably by the work of other parties”

The head of SIFA, James Walsh and the EO of the ADA, Barry Howlett, who should be providing constructive support for our legal fights, instead ‘liked’ this comment, effectively tying the brands of their organisations to positions of non-action.

For the record, when you take legal action and the other side caves in, and you get the result you wanted, that’s a win.

They weren’t the only ones who took a shot at the NSC. President of the WA Firearm Traders Association Bevan Steele, who is a WA Gun dealer and stood as a SFFP candidate at the recent WA State Election, posted on Facebook (commenting on a previous offer by the NSC to work with WAFTA):

“I remember u had nothing to offer and still don’t . Not seeing any case law being created or tangible victories for shooters-just pissing off govt and registries alike-yep good work”.

If avoiding “pissing off govt and registries” is a position that WAFTA wants to take, then fine – but there is no merit in pretending that all is well on our legal front.

Bring it on, Jack 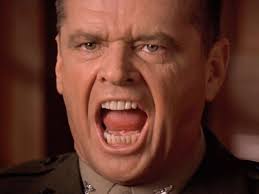 If those who criticise the NSC are after the packed courtroom drama of “A few good men”, then sorry, we can’t offer that.

The last thing shooters can afford is to have shooting organisations that say they represent shooters openly bag successful legal fights that are going to benefit the future of shooting – especially when we are yet to see them take actions of their own.

From a shooter, thank you for all you do!

I must admit, Your association with the shooting stuff podcast really has soured opinions. You really should have done your own vids.

I would say because of that we have gone from at least 2 seats in parliament of people who didn’t consider shooters as scum to now 0.

I appreciate the help you do for individual shooters but wapol have unlimited tax payer funds and will continue to fight. Unless we get a big class action or similar no major change will be had through the courts.

Gregfiddich oh so its the NSC’s fault that SFFP were wiped out lol?

Same happened to the LDP or did you choose to ignore that…or the fact that SFFP preferenced Labor on their HTV card in Aaron Stonehouse’s seat…or the fact that Rick Mazza told shooters to vote for Labor at the SSAA WA AGM?..Please, really!

NSC does get major airtime in gun circles, it’s what you do best and i no doubt you had an impact. That’s why i support you in what you are doing.

Unfortunately we will never have a perfect gun party but a half one playing politics is better than none.

Gregfiddich if the NSC had that much influence with WA Shooters then Stonehouse from the LDP would have been re-elected and GAP would have got one of theirs up…remember, that was our recommendation?

SFFP were wiped out because Mazza attempted to change seats, SFFP had poor candidates and remember Labors preferences were going to SFFP in at least two seats?

The fact that a minor pro-weed party appears to have gotten a candidate up says a lot really lol!

But I’m chuffed you think the NSC has that much clout lol!

I like Arron and the work he did was great. Unfortunately he got that seat due to where he was placed on the ballot last election. He admitted that himself. LDP don’t have a big following here in WA. I wish David L was prime minister the LDP policies align closely with mine and why i voted them.

Preference doesn’t matter if you vote under the line which is what i always recommend shooters do.

As a paid NSC member ultimately i was just trying to provide feedback in my initial comment. I see feedback is not wanted now.

In any case WA is screwed for the next 4 years regardless of the number of individuals who win court cases.

Greggfiddich the NSC always welcomes feedback from members and you could have sent that to us privately by Email or other communication means.

You choose to criticise the NSC Publicly because of your personal opinions and now you act hurt? And you and I both know most voters simply follow their chosen party or candidates HTV card…

Suggesting you make your own videos wasn’t criticism, it was a suggestion.

@NationalShootingCouncil i think that @Gregfiddich has a good point, making a podcast/video of your own would be a great thing.

That way you could keep shooters informed and be able to answer some questions that viewers post in the comment section. Once word gets out the number of viewers will climb.

They do have reasonably low viewer/subscriber numbers for these type of things, purely based on the fact that some people don’t like the channel in general. NSC branded live stream would definitely catch those users.

@NationalShootingCouncil Good work and congrats on another win!! While i’m definitely not criticising you for going on the show i have to agree with some of what’s been said, i’ve tried to watch that shooting stuff thing a couple of times and can never get further than a minute or two into it before ditching it, IMO those guys are just fucking annoying plan and simple, which is a real shame because they mean well and are trying to help shooters, plus they’re actually having a go.
I’d be interested in an NSC youtube channel and getting the info without the bullshit, as would a great majority of shooters i think.