NT Police have now charged the Alice Springs stabbing hero with unsecured ammunition. The ammo – is a tin of air pellets.

THE NSC has lodged an appeal for Ron, and once again secured the services of Jon Bortoli.

He’s the lawyer who saw Ron get through the previous legal fight he had over gun charges that astounded shooters, politicians and the media. 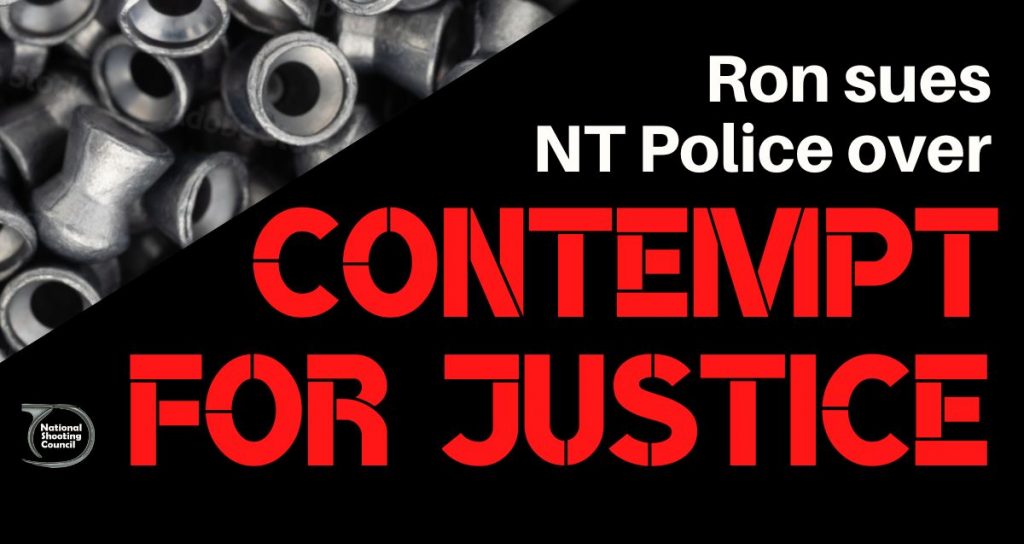 You might recall that last April, Ron went to the aid of a stabbed neighbour. She survived.

Ron was the good guy. However, rather than chase the perpetrator and thank Ron for what he did, Alice Springs Police charged him with several firearm offences (click here to see that story).

Mr Bortoli defended him which resulted in 3 charges and one other one being beaten.

He was found guilty of possessing a weapon (a bayonet).

However the Alice Springs Court specifically ordered the return of the bayonet, as well as Ron’s guns, ammo and licence to him. 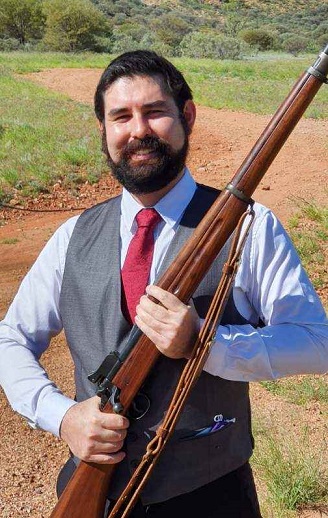 Ron gets his guns back after the court win

Earlier this year, Alice Springs police went to Ron’s house to revoke his licence and seize his guns. The reason for this was that he had been found guilty of the weapons charge – which we remind them the court had already dealt with.

Ron was in Adelaide at the time, so the police were stranded. Miracously, they gained a search warrant after seeing what they described as being ‘a dangerous drug, precursor, or drug manufacturing equipment’.

As we exclusively reported (click here), what they seized were household substances such as vinegar, water, acetone and … Ron’s famous chilli oil. 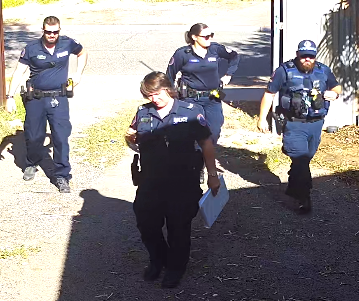 The police also seized several other items, several of which were listed as ‘replica firearms’ and unsecured ammunition. Readers will recall that among them were a 357 round, a 45 ACP and a 303 round.

As Ron explained in our recent video, the ‘replica firearm’ were Nerf guns and the rounds were all spent. They were casings or dummy rounds.

Check out our interview with Ron from this episode of NSCTV (click here) from the 22:38 mark.

DESPERATE TO LAY A CHARGE. ANY CHARGE. 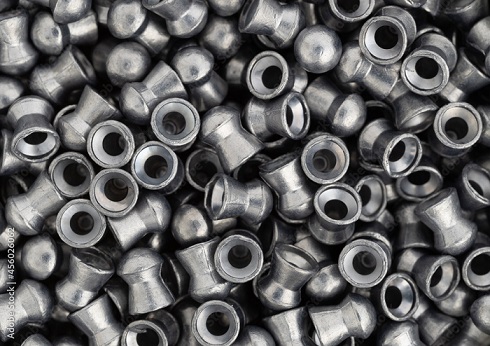 The only remaining option for NT Police was to charge him for the tin of air pellets.

In Victoria, air pellets are not regulated in the same way as ‘cartridge ammunition’. However, in the NT they are.

So, after all the fuss about Ron’s firearms when he saved his neighbour, the court fight to clear his name, the raid, the seizures and the return of the ‘replicas’ and ‘rounds’, the best that NT’s finest can come up with is a tin of unsecured air pellets.

The NT News has just published this story (paywalled) which shows the appeal claims the police trespassed on his property “in defiance of a judge’s ruling” which “amounts to contempt of court”.

It also reveals that the police intended to seize Ron’s guns without having served him with a revocation notice, which is a requirement in the NT.

This is likely to be an argument in the appeal, so we’re not inclined to discuss it further now, but it does raise some serious questions that I’m sure every shooter would love to know the answers to.

Wind the story back a bit and you will see that the pellets were seized from a raid that was based on woeful judgement around water, vinegar, asprin and chilli oil.

Those of you with a legal mind will quickly see the problem here. If the raid was not lawful, then that could cast doubt on even this charge.

As you will appreciate, supporting Ron through the legal system comes at a cost. Many of you have supported Ron through this so far, but we’ve got some way to go.

The great news is that we’re not only winning against the NT Police, but are showing to every registry how not to treat shooters in their state or territory.

We’ve proven just what a farce his treatment has been and think Ron deserves to have his name cleared.

IF YOU’VE ONLY JUST COME ACROSS THIS STORY and are equally outraged, please help us continue to fight for the right outcome by donating to his fight. Or simply join the NSC as the money we raise goes to fights just like this one (plus we offer genuine reason in some states).

Regardless of whether you can or can’t help, remember to check out the interview we had with Ron, and subscribe to our email list using the “Stay up to date – Join our email list” box below. 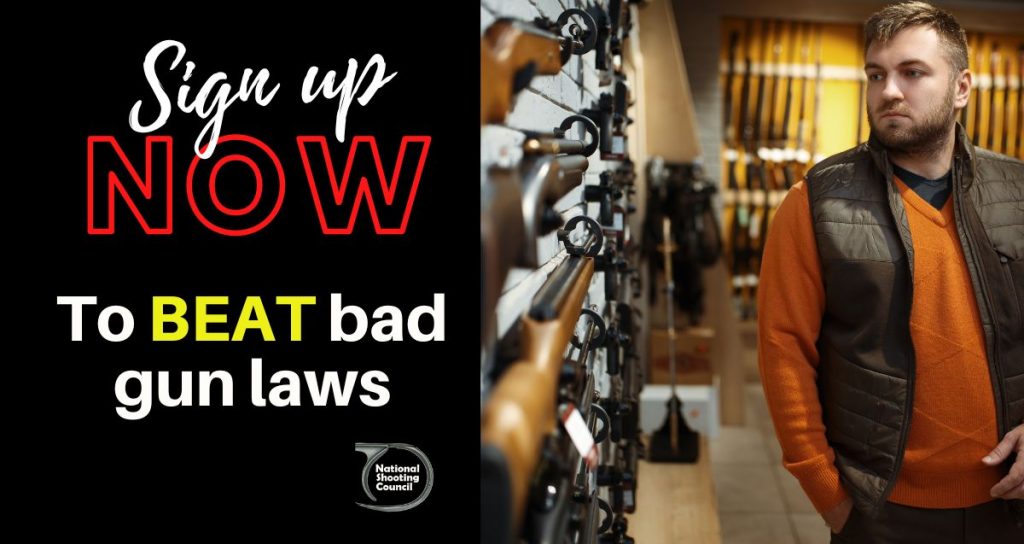 STAY UP TO DATE

Get regular updates from the National Shooting Council on what’s happening in the political world affecting the shooting sports in Australia.

You should add [email protected] to your contact list in your email program to avoid our updates going to your spam or junk folders.

Just enter your email address here – and you can opt out at any time!

Is it really any wonder that police are referred to by various derogatory “names”?
the Filth.
the Pigs.
the Blue Gang.
I guess somebody will be along shortly to add to the list.
And they want us to support them in their pursuit of making our community a safer place.
Yeh, right.

When these cockheads are acting on their own personal agendas instead of “protecting and serving” the community they are no longer fit for duty and should be sacked and banned from reinstatement for life.
Let them become mall security guards and flex their egos by yelling at school kids all day, that’s all they’re worth.

The NT Police Force Alice Springs is home to many oddball outcasts that cant be employed interstate or even in Darwin. High ranking oddballs too. I do wonder who is behind the push to charge and ruin Mr Sterry. Will be very interesting reading when the person behind all this, and it probably is one person who shall remain nameless for now comes to light in due process and all his prior activities are revealed.

Our last police commissioner was jailed for two years because he was elbows deep in a sheila who ripped off pensioners travel entitlements. Our current commish has achieved 80% no confidence from the police force he presides over, according to the NT Police Association survey. They used to say that the NT was the place that crooks escaped to from down south to avoid the law.

Yeah. Poor Ron is never getting let off with a warning for anything ever again, thats for sure.

I used to have a lot of respect for the popo, unfortunately, several non crime related interactions have left me with little but disdain for their everyday, petty vindictiveness and minor corruption when dealing with the public.

NSW police forcing teenagers to strip and squat in front of them because their sniffer dogs gave a false positive signal is just one example.
Particularly egregious in light of research showing fido is wrong 63% of the time.