The NSC has had a decisive win in a legal fight that enables shooters in WA to get access to the Ruger PC Charger.

THREE SHOOTERS who we supportedtrhough a marathon legal battle now have their guns licensed. Licensing a gun in WA is the same as having it registered in other states.

This comes after a similar fight we won in 2020 that WAPol reneged on, after coming up with a new argument to ban the gun.

The fight is a great outcome for WA shooters – courtesy of the NSC who fought this after the WA SSAA and Firearms Traders Association declined to back the move.

The original fight against reclassification of the gun on appearance was won in 2020.

However, WAPol retained the right to assess applications on a ‘case by case’ basis.

This left the door open for WAPol to worm their way out of it – but we needed to give them the opportunity to honour their agreement.

To no-one’s surprise, they reneged on the agreement, forcing the NSC to go back through the legal process. In doing this, WAPol argued that they could not licence the gun because the Ruger PC Charger could easily be changed to a category D longarm by fitting of a stock to the rear picatinny rail.

Unimpressed, we launched a new action that we were deeply confident we’d win.

ALL THREE APPLICANTS NOW HAVE THEIR GUNS

The fight that ensued went for several months. What became clear fairly early on was that WAPol wanted to avoid a decision being made that could have gone against them. Around the middle of the year, they proposed a solution to modify the gun so that it would not be possible to convert the gun to a category D.

Concerns were raised about whether the modifications would compromise the safety of the gun, however this was dispelled by experts at NOIA, which is the distributor of the firearm.

While we would have preferred that modifications of the gun should not be necessary, it was the three applicants who were happy to agree to the changes so the case proceeded on that basis. 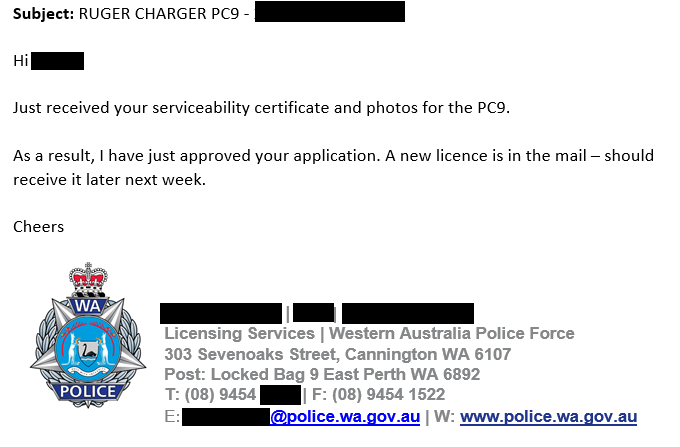 The applicants initially had a bit of difficulty finding gunsmiths who could do the modifications.

However they have now been done with the result that WA Police accepted the conversions and have issued ‘licences’ for the guns.

The important thing is that all three guns, which each of the applicants have, are now licenced. There is now no turning back.

The win by the NSC paves the way for more Rugers to be licenced in WA.

The first is that the receiver bracket is cut such that the vertical Picatinny / Weaver type modification is removed. This will prevent a buttstock being able to be attached, which WAPOL argues changes it to a category D longarm.

Plus, WA licence holders must also agree not to fit a front handgrip. Do these, and you should be able to get the Ruger.

This is not the only current fight we have over the Ruger.

We have another case that we think is going well in South Australia. Hopefully news on this will only be another few days away.

What has become clear to us is that the NSC’s original aim of challenging bad regulatory decisions through the legal system is producing better results than we had expected. It is evidence that the industry leaders who agreed to create and start the NSC in 2019 had the right vision, which is producing the results we need.

1 battle down, hundreds to go lol. Keep putting the pressure on them, one day they might start seeing us as normal people.