“In the current context, the Association does not consider the proposed changes to be excessive or onerous”

WE KNOW THIS IS ANOTHER LONG ARTICLE, but we have an important message about who is or is not opposing proposed draconian new gun laws for members of:

A few days ago, we told you about how the Victorian government was expanding police powers to make it easier to slap 10 year gun bans on anyone caught doing the wrong thing.

The powers currently allow police to impose the bans based on a person’s ‘behaviour’ or who they ‘associate with‘ which is not defined in the legislation, which means it will come down to an officer’s opinion.

The legislation does not require that the behaviour is illegal – which means it is possible for the bans to be imposed on engaging in behaviour that is quite legal – or simply something the police don’t like.

The new laws will also place new restrictions on firearm dealers, and require many gun owners to upgrade their safes. They are draconian by any measure.

On 22 September, the Weekly Times published this article below covering the matter. 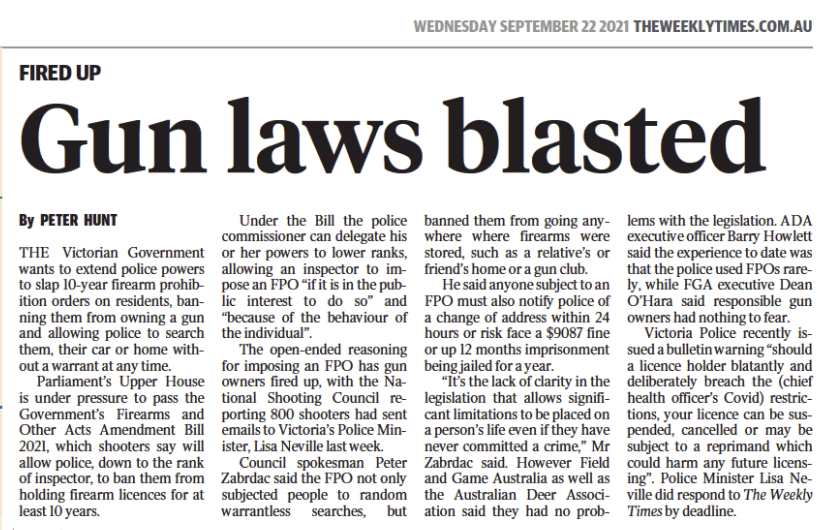 ADA AND FGA SIDE WITH THE GOVERNMENT

We wouldn’t normally comment on other shooting organisations but will speak up when they take positions that are contrary to our interests.

In this instance, officers from the Australian Deer Association and Field and Game Australia chose to pour cold water on what we were saying. 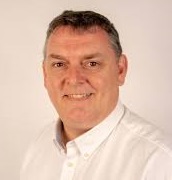 FGA CEO Dean O’Hara is reported as saying “responsible gun owners had nothing to fear”.

That’s not correct. As we said earlier, the legislation allows gun bans to be imposed on any one for any form of ‘behaviour’. It also allows them to be imposed for ‘associating‘ with people the police don’t like.

These are dangerous powers that lack any form of protection from misuse. That’s why we’re surprised to see two organisations siding with the government on this matter.

FGA’s position used to be the exact opposite.

In 2017, FGA’s previous Chair attended a meeting with other shooting organisations and MPs at Victoria’s Parliament House in an attempt to have safeguards put into these laws back then.

The legislation that is currently before parliament does a few other things.

It will require shooters to have safes with steel walls 1.6mm thick and impose new restrictions on firearm dealers.

This is a significant size because many smaller safes use 1.2mm steel and the proposal compares with shipping containers which have walls 1.9mm thick.

In early September, the SSAA released advice reporting on the Bill. While its summary is accurate, two things stood out to us. 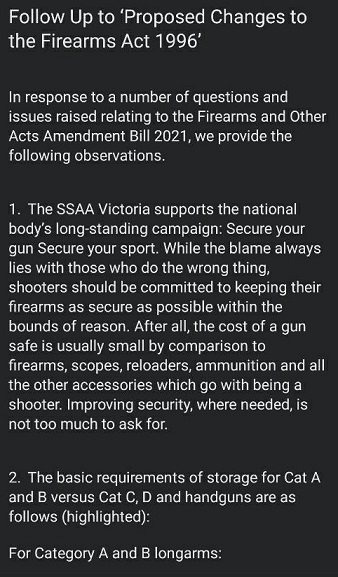 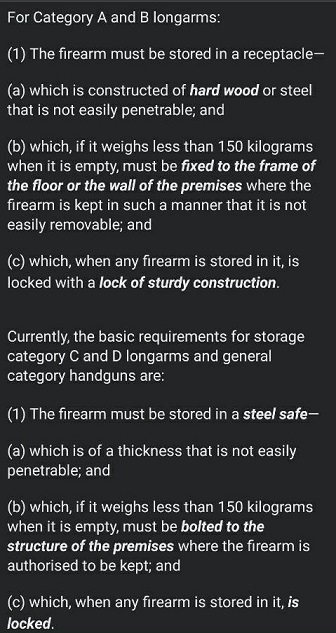 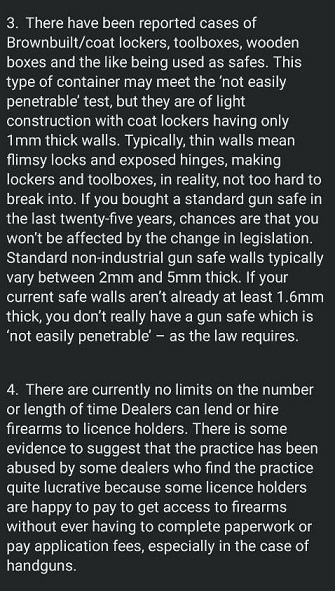 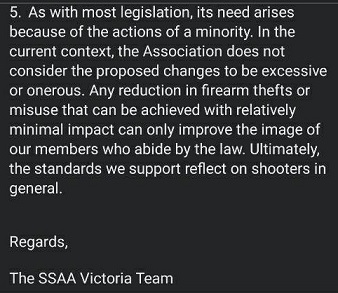 However the SSAA states the legislation is needed:

“… because of the actions of a minority”

“In the current context, the Association does not consider the proposed changes to be excessive or onerous”

In other words, the need for these draconian measures is our fault, and we should just cop it.

While we have strongly disagreed with the SFFP’s Jeff Bourman in the past, he’s opposing this Bill, making this is one of the few occassions that we’re happy to agree with him.

The NSC’s position, since the very beginning of this saga, has been to oppose the Bill in its entirety.

Not because we aren’t against sensible laws or measures (which these do not appear to be), but because we’re sick and tired of having government impose new bans and restrictions on us without any dialogue or consideration.

Whether any new laws have good or bad parts to it isn’t relevant. It’s got nothing to do with it. It’s about refusing to settle for the poor way shooters get treated in the policy making process.

There’s no reason why we should have to settle for this.

WHAT THE SHOOTING COMMUNITY NEEDS TO KNOW

We have three key questions that we think the shooting community is entitled to have answered:

As a result, we’ve written to Police Minister, Lisa Neville, putting our position on the Bill to her.

The good news is that there are shooting organisations who oppose the new laws and the positions taken by the ADA, FGA and SSAA. Some of them have contacted us but aren’t sure how to best voice their opinions.

Our advice to those organisations is to speak to your members – and feel free to speak through us. The NSC is in the process of briefing politicians as the Bill proceeds through Parliament – so our advice is to speak up now.

The NSC seems to be the only organisation that bothered to brief the media and MPs about the proposed changes.

Shooters nation-wide need an organisation that will stand up to the government and fight bad laws whenever they appear. Not ones that fall into line with the government because it is an easy thing to do.

They need an organisation that will take legal actions in every state & territory whenever they are required, help shooters know who to vote for at every election and never stop fighting for better laws. That’s what we do. Plus, we offer genuine reason in Qld, NSW and Victoria – with other states to follow.

Stand up to bad laws. Click here to join the NSC.

Good job guys, keep it up!
I’m proud to be a member of the NSC!