ANOTHER WIN IN NCAT 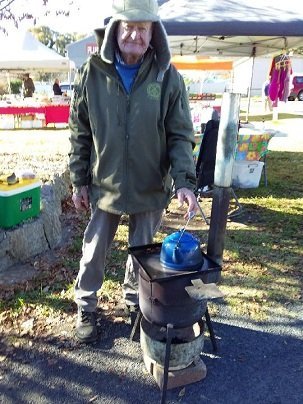 Peter Martin with one of his cookers

THE NSC HAS WON ANOTHER LEGAL FIGHT, this time helping a 77 year old pistol shooter who was targetted by the NSW Police registry over allegations made by a Norco store employee in 2021.

It is an outcome that left egg on the face of one of NSWPol’s top cops who rang the NSC to say the shooter would not be getting his licence back.

The win follows another victory against the NSW registry a few days earlier where we helped a wheelchair shooter win the right to keep his handgun at home.

Last year, we told you about Peter Martin. Peter is from Glen Innes in NSW and makes cookers and wood splitters.

He spends time growing veggies that he and his wife sell at the Glenn Innes Cottage Markets.

Peter held longarm licences for several years before taking up pistol shooting at the Reddistone Pistol Club in 2011.

He’s the sort of person you would love to have at your pistol club and would fit in, in any community.

Readers might recall this earlier story where Peter’s troubles started when he went to the Norco Rural Store in Glen Innes to purchase mice bait. 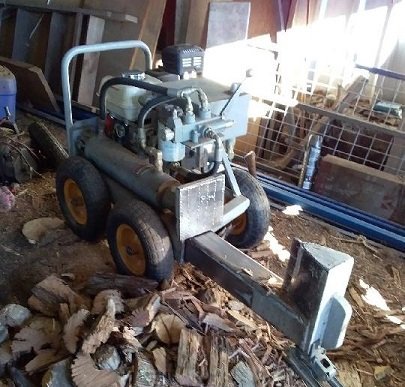 One of Peter’s wood splitters

He walked over to where the bait was stacked and was deciding which was the cheapest option to buy when an employee, Brett, came to help him. The conversation then moved to Peter’s involvement in shooting, which included a discussion on how to get a handgun licence.

Another Norco employee who he knew as “Bernie” had been listening to the conversation before walking into the store office where it would seem, unknown to Peter, the police were called.

Meanwhile Peter simply paid for the bait and then left the store.

On 9 April 2021, Peter received a notice of suspension from the registry that did not set out any reasons for it. Peter suspected it was of his trip to Norco so, with our help, Peter sent a letter of response back to the registry.

On 1 June 2021, he received a notice of revocation of his firearms licence and again, with our help, Peter applied for an internal review.

The statement of reasons that were subsequently provided to Peter on 10 August 2021 listed the reasons for the revocation, which were that he:

Not once did the police explain why they felt Peter was mentally unstable, why he had abused alcohol, or what it is he is supposed to have done that led to their interest in him in the first place.

That was enough to convince us to help Peter file the matter for a review at the NSW Civil & Administrative Tribunal (NCAT).

It was later revealed in evidence, that the NSW Police relied on an unsourced allegation that Peter was “a heavy alcoholic” with no evidence offered.

The only evidence that was forthcoming came from Peter’s side, was his interest in brewing beer. Nothing else came up during hearing.

In evidence, the NSW Police gave NCAT a statement by Mr Bernard Julian, who works at Norco, that Peter told him:

“you better be careful what you say, you don’t know what [I’m] carrying”

and patted his chest pocket area.

The statement claims Peter took his wallet out from his pocket and showed his gun licence and said “That shows I carry a handgun”, then proceeded to say he had handguns and was a member of the Emmaville pistol club.

That’s odd, because Peter had never been a member of that club, and in any case, Emmaville is a range, not a club.

The allegations state that Bernie told Peter “You better have to get [the gun] out quick because I am a good runner”, to which Peter allegedly replied “I can get you before you cross the road”, and “I’ve got a 10 shot a semi-auto in here and the hollow points will stop you in your tracks”. These are claims which Peter denied.

The statement claims that Bernie then informed his supervisors about the incident who advised him to contact police.

Elsewhere, the NSW Police stated that Peter’s statements were “intimidating” and “raised the possibility that the applicant might be armed”.

… which is odd, because someone who is intimidated does not tell someone to get their gun out, or that they ‘are a good runner’.

Mr McBain is a 75 yo farmer aged 75 with extensive experience with firearms. He joined the army as a volunteer and had served in combat in South Vietnam.

Mr McBain had known Peter for 11 or 12 years in the Reddistone Pistol Club, noting that he (Peter), had never failed to meet his attendance requirements and was, by all accounts, a model member.

Despite the lack of evidence and submissions supporting Mr Martin, NSW Police also required him to undergo a psychologist’s assessment. ThIs occurred in March and April.

Suffice to say, this turned up nothing.

Another issue NSW Police raised during the case against Peter was its concern that he had practiced dry firing at home.

As any shooter knows, dry firing is not only common, but necessary for any shooter to hone their skills or even set up their guns properly.

Certainly anyone who wishes to compete at interclub or state level will need to practice dry firing, at home or at the range.

If anything, it shows just how little NSW Police know about the shooting sports, which we have seen before.

In the final decision, the NCAT member noted of the Police’s evidence on dry firing that it:

“…was based on a double hearsay representation by a redacted person about a statement by an unnamed and unidentified person at an unstated date.”

That summed up the quality of the evidence against Peter. It is reminiscent of our recent criticisms of WA Police, whose evidence is also frequently weak or non-existent.

In early July, Emeritus Professor Geoffrey Walker handed down his decision. In it, he said:

“On a balanced view of the evidence, bearing in mind all the relevant circumstances, I find that there is virtually no risk to the public (including to the applicant himself) involved in the applicant’s holding a category ABH firearms licence.”

Here’s the order he made:

THE IMPORTANCE OF YOUR SUPPORT

This win is what your donations help support. Please consider supporting the NSC’s ongoing legal fights to get the better regulatory decisions that shooters are entitled to.

Click here to see how you can support this work.

… WITH EGG ON HIS FACE

In our earlier article, we mentioned that we had raised this matter with the former NSW Police Minister, David Elliott, and copied the NSW Police in.

We do appreciate the fact he called us, but Scott doubled down on the registry’s position by saying that there was more to this story than we had been told without saying what, and that Peter was not getting his licence back.

While we’re critical of the NSW Police, we hope it’s clear that the registry is the problem here. We’re hope that AC Scott will look at the registry’s behaviour and help us build a better and more open dialogue to avoid battles like this.

Your support helps us win more fights. Join the NSC

Couple of things come to mind from reading the above, including:

Yay, win for the little guy.

There has to be more to this.

“Bernie” needs sewing up inside a dead cow regardless.

I find it so absolutely typical of NSW popo, after being sent on a wild goose chase by an obviously anti-gun nutsack, the case gets thrown out for an utter lack of any evidence other than 2nd and 3rd hand heresay and hyperbole, and rather than prosecute “bernie” for malicious mischief, they double down on the persecution of the victim of this whole goatfuck.

The author diplomatically says he see it as a registry problem.

Registry, don’t bring or press charges, registry are not the problem here.
NSWFAR may be staffed entirely by people with virtually zero firearms knowledge or experience but as far as I know, they act on police direction.

This is entirely the result of having a police force with a police state culture and mindset.

An acquaintance who went through the academy but couldn’t stomach that culture told me that in one of the introductory lessons the instructor stated that “you have to remember one thing, there are only three types of people in this world, there’s the Pleece, the offender and the bloody public” David Elliott looks just like what he is. Great work again NSC. Alright everybody, last one to donate to NSC gets gender reassignment surgery. You’ll be dry firing then I guarantee.

Is it just me, and maybe Alexi Sayle, but can anyone else see Il Duce?