THE WESTERN AUSTRALIAN GOVERNMENT is bringing in new laws which could ban anyone from owning a gun for up to 10 years and impose new restrictions on what licenced shooters can do.

The changes are the latest attack on shooters out west, which are being done to grab media headlines rather than fix any problems with the existing laws. They are also taking the state further away from complying with the National Firearms Agreement that it says it adheres to.

Unfortunately, the SSAA WA says it agrees with the intent of the legislation, and has published this insipid information on its website.

GUN BANS THAT CAN APPLY TO ANYONE

Among the changes being made in WA is the introduction of ‘Firearm Prohibition Orders’ which effectively bans the person who gets one, from going anywhere near firearms for 10 years.

The Government has said the new laws are aimed at “activities of bikies and organised syndicates”. However, the legislation doesn’t say that. Nowhere will you find the words “bikies”, “criminals”, “crime”, or “syndicates” in the legislation.

Instead the laws apply to ‘a person’.

The new laws are a blank cheque that will give the WA Police the authority to target any one of WA’s 2.6m residents – regardless of age or history.

THE RIGHT TO KICK DOWN ANY DOOR

The laws will not only permit police to search anyone hit with a ban, but their premises and any other person with them.

They will also permit police to search premises they are at or ‘manage’. If the person manages a motel you’re staying at, then they’ll have the right to kick your door in, regardless of who you are or why you are there.

Minister Papalia said the laws are designed to keep guns away from ‘crime circles’.

However he is no stranger to exaggeration. In mid 2021, Papalia said gel blasters needed to be banned because they could be easily converted to ‘workable firearms’. A few weeks ago, we published this story where we revealed documents obtained under Freedom of Information that showed the claim to be untrue.

THE TEST FOR GETTING A GUN BAN

Here’s a quick look at what other states do.

NSW: The NSW regime requires the Commissioner to form the opinion that a person is not fit to have possession of a firearm, and that it is in the public interest for a gun ban to apply. 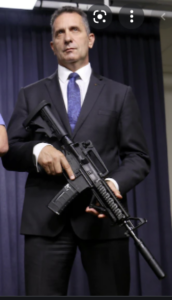 Vic: The laws in Victoria differ in that an inspector simply needs to disapprove of the persons ‘behaviour’.

SA: Laws in South Australia require that possession of a firearm by the person “would be likely to result in undue danger to life or property” or that they are not fit and proper to possess a firearm.

The proposed law for WA only requires the Commander to be satisfied ‘it is in the public interest’ to issue a gun ban.

No state requires a person to have committed a crime or even be acting inappropriately. They could be someone who has never broken the law, but still have their lives severely limited.

Probably more important is the fact that if you want to get a firearm in any of those states, you need to be licensed by the relevant police force.

This means possession of a firearm without a licence is already illegal, which means you don’t need another law like this. You just need to enforce the ones you already have.

The legislation does a few other things around the manufacture of firearms and firearm parts.

While we understand the sentiment about curbing illicit gun manufacture, it is clear that the advice that Minister Papalia is getting is not well informed.

Many shooters have already expressed concern how the new laws appear to prohibit the reloading of ammunition and self-repairing of firearms.

Prior to publishing this article, WAPol contacted us about concerns we had raised with the minister. They assured us that there are exemptions to this in licences (for example, to allow reloading for own use) however they are yet to send us something we can post here to confirm that.

The fact this confusion exists is why Minister Papalia needs to stop the bill and consult now. In fact WAPol told us that they had consulted SSAA WA and a well known pro-gun political party, but that clearly hasn’t avoided the confusion.

The legislation also defines ‘firearm precursor’ parts. This includes ‘technology’ which could be programmed to make firearm parts, and ‘milling devices.’

The bill is a mess.

WA’S OWN VERSION OF THE NFA

While the states often say they adhere to the National Firearms Agreement, none of the changes being proposed by the WA Government are in line with it.

In fact WA is already quite non-compliant. It does not provide for mutual recognition of licences and does not issue permits to acquire (instead licensing individual firearms which is less shooter friendly).

The NFA clearly has major policy problems in it, but there is an expectation that states who sign up to it, will comply with it fully.

WA has signed up but does not follow it. The new laws take the state further away from it.

We sought a meeting with Minister Papalia, but have received no response.

While we are limited in our ability to influence what the WA Parliament does, we’re going to give it our best go.

We are already engaging with MPs to try and put a stop to this shambolic legislation from going through.

In the meantime, we encourage shooters to let Minister Papalia know that he needs to stop the legislation and speak with the NSC before going any further.

(this should open your email program, if you have one)

As usual we are getting shafted .

Would you expect anything else mate?